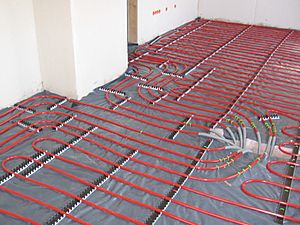 Underfloor heating pipes, before they are covered by the screed

Underfloor heating has a long history back into the Neoglacial and Neolithic periods. Archeological digs in Asia and the Aleutian islands of Alaska reveal how the inhabitants drafted smoke from fires through stone covered trenches which were excavated in the floors of their subterranean dwellings. The hot smoke heated the floor stones and the heat then radiated into the living spaces. These early forms have evolved into modern systems using fluid filled pipes or electrical cables and mats. Below is a chronological overview of under floor heating from around the world.

Modern underfloor heating systems use either electrical resistance elements ("electric systems") or fluid flowing in pipes ("hydronic systems") to heat the floor. Either type can be installed as the primary, whole-building heating system or as localized floor heating for thermal comfort. Some systems allow for single rooms to be heated when they are a part of a larger multi-room system, avoiding any wasted heat. Electrical resistance can only be used for heating; when space cooling is also required, hydronic systems must be used. Other applications for which either electric or hydronic systems are suited include snow/ice melting for walks, driveways and landing pads, turf conditioning of football and soccer fields and frost prevention in freezers and skating rinks. A range of underfloor heating systems and designs are available to suit different types of flooring.

Some commercial buildings are designed to take advantage of thermal mass which is heated or cooled during off-peak hours when utility rates are lower. With the heating/cooling system turned off during the day, the concrete mass and room temperature drift up or down within the desired comfort range. Such systems are known as thermally activated building systems or TABS.

The terms radiant heating and radiant cooling are commonly used to describe this approach because radiation is responsible for a significant portion of the resulting thermal comfort but this usage is technically correct only when radiation composes more than 50% of the heat exchange between the floor and the rest of the space.

Hydronic systems use water or a mix of water and anti-freeze such as propylene glycol as the heat transfer fluid in a "closed-loop" that is recirculated between the floor and the boiler.

Various types of pipes are available specifically for hydronic underfloor heating and cooling systems and are generally made from polyethylene including PEX, PEX-Al-PEX and PERT. Older materials such as Polybutylene (PB) and copper or steel pipe are still used in some locales or for specialized applications. 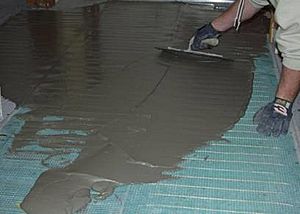 Electric systems are used only for heating and employ non-corrosive, flexible heating elements including cables, pre-formed cable mats, bronze mesh, and carbon films. Due to their low profile, they can be installed in a thermal mass or directly under floor finishes. Electric systems can also take advantage of time-of-use electricity metering and are frequently used as carpet heaters, portable under area rug heaters, under laminate floor heaters, under tile heating, under wood floor heating, and floor warming systems, including under shower floor and seat heating. Large electric systems also require skilled designers and tradespeople but this is less so for small floor warming systems. Electric systems use fewer components and are simpler to install and commission than hydronic systems. Some electric systems use line voltage technology while others use low voltage technology. The power consumption of an electric system is not based on voltage but rather wattage output produced by the heating element. 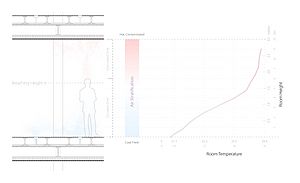 Vertical temperature gradient, caused by stable stratification of air inside a room without underfloor heating. The floor is over three degrees Celsius colder than the ceiling.

As defined by ANSI/ASHRAE Standard 55 – Thermal Environmental Conditions for Human Occupancy, thermal comfort is, "that condition of mind which expresses satisfaction with the thermal environment and is assessed by subjective evaluation." Relating specifically to underfloor heating, thermal comfort is influenced by floor surface temperature and associated elements such as radiant asymmetry, mean radiant temperature, and operative temperature. Research by Nevins, Rohles, Gagge, P. Ole Fanger et al. show that humans at rest with clothing typical of light office and home wear, exchange over 50% of their sensible heat via radiation.

Underfloor heating influences the radiant exchange by warming the interior surfaces. The heating of the surfaces suppresses body heat loss resulting in a perception of heating comfort. This general sensation of comfort is further enhanced through conduction (feet on floor) and through convection by the surface's influence on air density. Underfloor cooling works by absorbing both short wave and long wave radiation resulting in cool interior surfaces. These cool surfaces encourage the loss of body heat resulting in a perception of cooling comfort. Localized discomfort due to cold and warm floors wearing normal footwear and stocking feet is addressed in the ISO 7730 and ASHRAE 55 standards and ASHRAE Fundamentals Handbooks and can be corrected or regulated with floor heating and cooling systems.

Underfloor heating can have a positive effect on the quality of indoor air by facilitating the choice of otherwise perceived cold flooring materials such as tile, slate, terrazzo, and concrete. These masonry surfaces typically have very low VOC emissions (volatile organic compounds) in comparison to other flooring options. In conjunction with moisture control, floor heating also establishes temperature conditions that are less favorable in supporting mold, bacteria, viruses and dust mites. By removing the sensible heating load from the total HVAC (Heating, Ventilating, and Air Conditioning) load, ventilation, filtration and dehumidification of incoming air can be accomplished with dedicated outdoor air systems having less volumetric turnover to mitigate distribution of airborne contaminates. There is recognition from the medical community relating to the benefits of floor heating especially as it relates to allergens.

Under floor radiant systems are evaluated for sustainability through the principles of efficiency, entropy, exergy and efficacy. When combined with high-performance buildings, underfloor systems operate with low temperatures in heating and high temperatures in cooling in the ranges found typically in geothermal and solar thermal systems. When coupled with these non-combustible, renewable energy sources the sustainability benefits include reduction or elimination of combustion and greenhouse gases produced by boilers and power generation for heat pumps and chillers, as well as reduced demands for non-renewables and greater inventories for future generations. This has been supported through simulation evaluations and through research funded by the U.S. Department of Energy, Canada Mortgage and Housing Corporation, Fraunhofer Institute ISE as well as ASHRAE.

Low-temperature underfloor heating is embedded in the floor or placed under the floor covering. As such it occupies no wall space and creates no burn hazards, nor is it a hazard for physical injuries due to accidental contact leading to tripping and falling. This has been referenced as a positive feature in healthcare facilities including those serving elderly clients and those with dementia. Anecdotally, under similar environmental conditions, heated floors will speed evaporation of wetted floors (showering, cleaning, and spills). Additionally, underfloor heating with fluid-filled pipes is useful in heating and cooling explosion-proof environments where combustion and electrical equipment can be located remotely from the explosive environment.

There is a likelihood that underfloor heating may add to offgassing and sick building syndrome in an environment, particularly when the carpet is used as flooring.

All content from Kiddle encyclopedia articles (including the article images and facts) can be freely used under Attribution-ShareAlike license, unless stated otherwise. Cite this article:
Underfloor heating Facts for Kids. Kiddle Encyclopedia.