Union Army of the West facts for kids 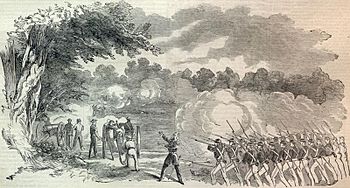 Battle of Boonville, first battle by the Army of the West

The Union Army of the West was a Union Army in the Western Theater of the American Civil War. It was made up of only four brigades and operated in Missouri. It was formed shortly after May 10, 1861 and was disbanded on August 19, 1861. The Army of the West was commanded by Brigadier general Nathaniel Lyon until his death at the Battle of Wilson's Creek on August 10, 1861.

By the time the Civil War started, Missouri had already already been engaged in a border war between free-soilers and proslavery forces over statehood for neighboring Kansas. Both parties raided both sides of the border. There was a great deal of lawlessness and panic in the region. When the Civil War started, the issue became whether Missouri would join the Confederacy or remain loyal to the Union. The newly elected governor in 1860 was Claiborne Fox Jackson. While he openly did not call for secession from the Union, he was making plans for Missouri to join the Confederacy. He knew the most important resource in the state was the federal arsenal at St. Louis. There was only a small detachment of Union soldiers that guarded the arsenal and were under the command of Captain Lyon. Jackson called out his state militia.

Meanwhile, the United States Secretary of War, Simon Cameron, had sent a letter to Lyon, the temporary commander of the arsenal, authorizing him to raise more companies of Union soldiers. It was endorsed by President Abraham Lincoln and Lieutenant general Winfield Scott. On May 10, 1861, Lyon surrounded the camp of the Missouri Militia and arrested all of the members. He marched his prisoners through the streets of St. Louis to the arsenal. When Southern sympathizers in St. Louis started a riot, Lyon quickly put it down. Many of the rioters were killed.

Brigadier general William S. Harney, who had left Lyon in temporary command, returned to St. Louis with two companies of Union artillery and two companies of Union infantry. He reassureed the citizens of St. Louis that the Union army would protect them. He condemned the actions of the state legislature and governor in making any effort to join the Southern cause. He also wrote to General Scott saying he approved of Lyon's actions. On May 17, 1861, Lyon was promoted to the rank of brigadier general, his date of rank being 18 May.

The history of the Union Army of the West begins with Lyon's promotion to brigadier general and his being given overall command. His forces were made up of a combination of regular United States Army and volunteer units from Missouri, Iowa and Kansas. The Army of the West was made up of the following brigades:

On June 13, 1861, after failed negotiations with Governor Jackson, Lyon quickly moved his army to attack the pro-confederate forces at Jefferson City, Missouri. the state capital. He moved quickly enough to catch them unprepared. On June 15, the Army of the West occupied Jefferson City. On June 17, both sides fought the Battle of Boonville which lasted only about 30 minutes. The Union forces completely routed the pro-confederates. Jackson and most of his militia retreated to the southwest corner of Missouri, close to Confederate help from Arkansas.

By the second week of July 1861, the Army of the West was camped at Springfield, Missouri. In total, Lyon had about 5,400 soldiers in his command. About 75 miles to the southwest of Springfield, the pro-south militia were camped. They were under the command of Major general Sterling Price. Price was joined by Confederate generals Benjamin McCulloch and Nicholas Bartlett Pearce. Combined their forces numbered about 12,000. In late July both forces started moving closer to together under the command of McCulloch.

On August 9, 1861, Lyon marched his troops from Springfield to where the Confederates were now camped at Wilson Creek. His plan called for Colonel Sigel to do a flanking maneuver on the Confederates and attack them from their rear. The rest of Lyon's forces would attack from the north. On August 10, the (first) Battle of Wilson's Creek began with Sigel's flanking maneuver which surprised the Confederate army. It allowed the Union army an early advantage. The two armies fought fiercely in the fields and hills around Wilson's Creek. After six hours of fighting and numerous casualties on both sides, the Union forces withdrew. During the battle, Lyon was killed and Major Sturgis replaced him. Three times the confederates attacked the Union line and failed to break through all three times. After the third attack at about 11:00 am, the Confederates fell back. With his ammunition running low and his men exhausted Sturgis withdrew to Springfield. Too disorganized to follow, the Confederate army did not pursue. While it was a technical victory for the Confederates, the Union army kept control of Missouri for the rest of the war.

All content from Kiddle encyclopedia articles (including the article images and facts) can be freely used under Attribution-ShareAlike license, unless stated otherwise. Cite this article:
Union Army of the West Facts for Kids. Kiddle Encyclopedia.