The population of Upper Macungie Township was 20,063 as of the 2010 U.S. census thus making it one of the fastest growing areas in the state of Pennsylvania in terms of total population.

Upper Macungie also has among the highest median family and household income rates in the state of Pennsylvania with an average nearly double that of the state overall. 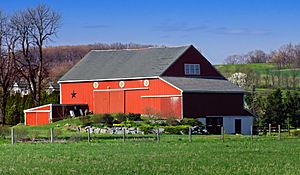 A Pennsylvania Dutch style barn near Newtown Road in Breinigsville 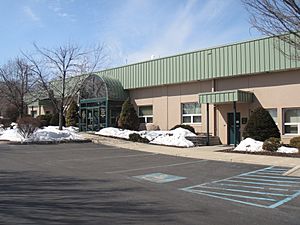 There were 7,843 households, out of which 35.8% had children under the age of 18 living with them, 66.0% were married couples living together, 6.5% had a female householder with no husband present, and 25.2% were non-families. 20.2% of all households were made up of individuals, and 8.8% had someone living alone who was 65 years of age or older. The average household size was 2.65 and the average family size was 3.08.

All content from Kiddle encyclopedia articles (including the article images and facts) can be freely used under Attribution-ShareAlike license, unless stated otherwise. Cite this article:
Upper Macungie Township, Lehigh County, Pennsylvania Facts for Kids. Kiddle Encyclopedia.