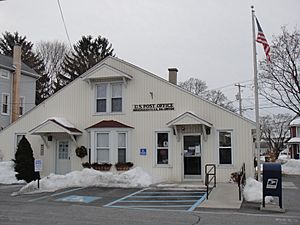 Breinigsville was named for George Ludwig Breinig (January 31, 1733 – May 12, 1812), a German immigrant who came to America on board the ship Lydia, arriving in Philadelphia on October 13, 1749. He originally settled in Weisenberg Township (tax records show he was assessed 9 pounds in 1762). On May 10, 1771, Breinig purchased around 100 acres (40 ha) of land and a stone dwelling for 700 pounds from Peter and Catherine Trexler (of "Trexlertown") along "the great road leading to Philadelphia".

He resided on that land until his death. Breinig was one of the judges of the election at Allentown, on July 8, 1776, when delegates to the first constitutional convention of the state were elected. During the Revolutionary War, Breinig became the colonel of the Second Battalion of Northampton county militia. In 1786, he was commissioned a justice of the district of Macungie and Weisenberg townships. Breinig is buried at Zion Lehigh Lutheran Church, Alburtis.

Among his seven children was Peter Breinig, the youngest son, and the founder of Breinigsville, who owned a 123-acre (50 ha) farm. He built a tavern in the village and operated it for some years. As in most early towns, the tavern served as the center of the community. Today, the tavern is in the location of the Breinigsville Hotel.

In the early 1800s, the village was a center for the mining of iron ore, furnishing employment to many men. Around 1855, the Allentown Railroad was graded through Breinigsville, but the tracks were never laid. In the 1860s, the Catasauqua and Fogelsville Railroad used the grade to build from Trexlertown, on its main line, into Breinigsville, as part of a branch to serve local limonite (iron ore) mines. The largest deposit of pyrite ore in the region was located 2 miles northwest of Breinigsville. Later, the village was served by the Allentown-Reading Traction Company. These mines had shut down by the end of World War I, and the rails through Breinigsville were consequently abandoned. They were finally removed in the 1940s.

On the western edge of Breinigsville, a United Brethren Church was built in 1880 whose membership at one time peaked at around 40. Regular services discontinued in 1912.

At one time, the village had a lumber, grain, and coal depot, a carriage works, and a general store, which are no longer in existence. In the mid-1800s, a two-room school house was built in the town, with the upper grades taught by Miss Edith Walbert and the lower grades taught by Mr. John Shoemaker. While the school has long ceased operations, the building still stands. Around 1860, an independent school district was formed in the township by an act of the legislature. The single school replaced the dozens of smaller schools, including the one in Breinigsville. The school district served until the early 1900s, when the Parkland School District was formed.

In 1987, AT&T acquired around 137 acres in Breinigsville which became to be known as TEK Park Campus. The facility became Bell Labs' world headquarters for optoelectronics research. In the late '90s, the center was spun off as Lucent Technologies. In 2002, it was spun off again as Agere Systems. In 2003, the park was sold to TriQuint Semiconductor. In 2012, TEK Park was sold to MRA Group for $50 million. 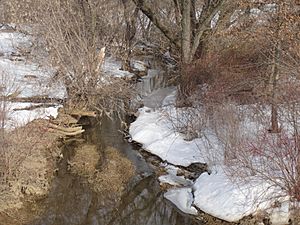 Breinigsville lies within the humid continental climate zone (Köppen: Dfa ), and experiences four distinct seasons. Summers are hot and humid, with a July daily average of 83 °F (28.3 °C). In a normal summer, temperatures exceed 85 °F (29 °C) on 15 days. Winters are cold and snowy with few sunny days, and with a January daytime average high of 34 °F (1.1 °C). Spring and autumn are mild seasons with low humidity. 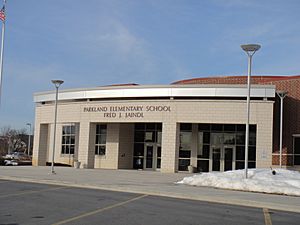 The Fred J. Jaindl Elementary School, which opened fall of 2010, is located in Breinigsville.

Terry Hill Waterpark and Campgrounds, a 43-acre (0.17 km2; 0.067 sq mi) waterpark, is located in Breinigsville. As of January 2010, the waterpark was shut down and available for purchase, while the adjacent trailer park remained in operation.

Breinigsville has a number of neighborhood parks and playgrounds. Breinigsville Park is located in the center of Breinigsville. That park, 24.3-acre (0.098 km2; 0.0380 sq mi), has 2⁄3 mile of paved walking/cycling paths. Additionally, it offers a Baseball and Softball fields, Basketball and a Sand volleyball court. The park hosts a large fireworks show every year on Independence Day.

Though it is widely thought to be in Trexlertown, as evidenced by its nickname "T-Town", the Lehigh Valley Velodrome is actually located in the Breinigsville section of the township. It is one of the most well known cycling stadiums in the country and attracts cyclists from all over the world.

In 2004, then-president George W. Bush made an unannounced stop at the Home Town Diner in Breinigsville, PA.

In 2012, an entire episode of 30 Minute Meals featuring Rachael Ray and Regis Philbin was filmed from the home of a couple from Breinigsville.

All content from Kiddle encyclopedia articles (including the article images and facts) can be freely used under Attribution-ShareAlike license, unless stated otherwise. Cite this article:
Breinigsville, Pennsylvania Facts for Kids. Kiddle Encyclopedia.