The borough borders six neighboring municipalities: Woodcliff Lake, Upper Saddle River, Park Ridge, and River Vale in Bergen County; and both Pearl River (in the Town of Orangetown) and Chestnut Ridge (in the Town of Ramapo) in Rockland County, New York.

Unincorporated communities, localities and place names located partially or completely within the township include Chestnut Ridge and Upper Montvale.

Montvale is serviced by the Garden State Parkway at exits 171 and 172, as well as the New York State Thruway in Chestnut Ridge.

There were 2,778 households out of which 39.3% had children under the age of 18 living with them, 68.6% were married couples living together, 8.1% had a female householder with no husband present, and 20.7% were non-families. 17.6% of all households were made up of individuals, and 7.3% had someone living alone who was 65 years of age or older. The average household size was 2.82 and the average family size was 3.22. 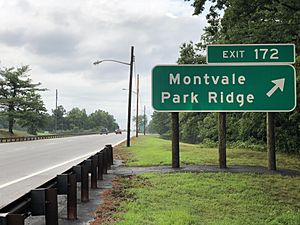 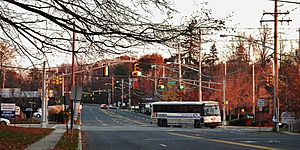 The intersection of Chesnut Ridge Road and Grand Avenue

Montvale is served by NJ Transit at the Montvale train station, located at the intersection of Kinderkamack Road and Grand Avenue. The station offers service on the Pascack Valley Line, which runs north–south to Hoboken Terminal with connections via the Secaucus Junction transfer station to New Jersey Transit one-stop service to New York Penn Station and to other NJ Transit rail service. Connections are available at the Hoboken Terminal to other New Jersey Transit rail lines, the PATH train at the Hoboken PATH station, New York Waterways ferry service to the World Financial Center and other destinations and Hudson-Bergen Light Rail service.

Each Memorial Day, the Tri-Boro area consisting of Montvale, Woodcliff Lake, and Park Ridge all participate in the annual Memorial Day Parade.

Montvale is home to the corporate headquarters of numerous major companies including the former Japanese firm, Sharp Corporation (Sharp US Headquarters) and Benjamin Moore. In January 2015, Mercedes-Benz USA announced that they would be moving their headquarters from New Jersey to the Atlanta area later that year. The company had been based in North Jersey since 1972 and has had 1,000 employees on a 37-acre (15 ha) campus in Montvale. Despite incentive offers from the State of New Jersey to remain in Bergen County, Mercedes-Benz cited proximity to manufacturing facilities and a growing customer base in the southeast in addition to as much as $50 million in tax incentives from Georgia governmental agencies. The borough was the world headquarters for The Great Atlantic & Pacific Tea Company (parent company of supermarket chains including A&P Markets, Pathmark and Waldbaum's) from the 1970s until its bankruptcy in 2015.

Montvale is home to the operational headquarters of Ingersoll Rand, Pentax and KPMG have a large local presence. The international marketing and commercial services headquarters of Western Union are located in Montvale.

The Shoppes at DePiero's Farm is a strip mall located on the former site of DePiero's Farm that opened on September 24, 2017. It is located just off exit 172 of the Garden State Parkway, directly across from the former Mercedes-Benz headquarters office. Notable tenants include the first location of Wegmans in Bergen County. Due to state blue laws in effect in Bergen County, most retail stores in the strip mall are closed on Sundays except for grocery stores and restaurants.

The Montvale Public Schools serve students in pre-kindergarten through eighth grade. As of the 2018–19 school year, the district, comprised of two schools, had an enrollment of 980 students and 88.0 classroom teachers (on an FTE basis), for a student–teacher ratio of 11.1:1. Schools in the district (with 2018–19 enrollment data from the National Center for Education Statistics) are Memorial Elementary School with 519 students in grades PreK through 4 and Fieldstone Middle School with 451 students in grades 5 to 8.

Public school students from Montvale in ninth through twelfth grades attend Pascack Hills High School along with students from neighboring Woodcliff Lake. The school is part of the Pascack Valley Regional High School District, which also serves students from Hillsdale and River Vale. Pascack Hills High School was the 7th-ranked public high school in New Jersey out of 339 schools statewide, in New Jersey Monthly magazine's September 2014 cover story on the state's "Top Public High Schools", after being ranked 18th in 2012 out of 328 schools. As of the 2018–19 school year, the high school had an enrollment of 842 students and 70.0 classroom teachers (on an FTE basis), for a student–teacher ratio of 12.0:1. Seats on the nine-member board of education are allocated based on the population of the constituent districts, with two seats assigned to Montvale.

Montvale is the home of Saint Joseph Regional High School, a college preparatory school for young men founded in 1962 in the Xaverian tradition of Catholic education, operating under the supervision of the Roman Catholic Archdiocese of Newark.

People who were born in, residents of, or otherwise closely associated with Montvale include:

All content from Kiddle encyclopedia articles (including the article images and facts) can be freely used under Attribution-ShareAlike license, unless stated otherwise. Cite this article:
Montvale, New Jersey Facts for Kids. Kiddle Encyclopedia.