Ursa Minor is a constellation in the northern sky. It is often called the Little Bear or the Little Dipper. Just like the related constellation Ursa Major, or the Big Bear or Big Dipper, it seems to have a long handle leading to a cup or ladle. The end of the handle is the North Star, called Polaris.

The ancient astronomer Ptolemy included Ursa Minor in his list of 48 constellations. It is now one of the 88 modern constellations. Ursa Minor is special because it includes the north celestial pole. However, this will change after several hundred years because the Earth will change the direction of its axis. That movement is called precession

A dipper, or ladle

Ursa Minor is often called the Little Dipper because its seven brightest stars seem to be in the shape of a dipper (ladle or scoop). The star at the end of the dipper handle is Polaris, the North Star.

Polaris is the brightest star in the constellation. It is a 'yellow-white' supergiant shining at 2.02 apparent magnitude. It belongs to an unusual class of stars called Cepheid variables. The brightness of Polaris can change. The second brightest star is β UMi (Kochab). It is a 2.08 orange giant star.

The four stars in the "bowl" of the little dipper are very useful for star watchers. They are of second, third, fourth and fifth magnitude. These stars are an easy guide to knowing what magnitude stars are visible. This is helpful for people who live in cities where light can make dim stars hard to see. It is also a way of testing your eyesight.

There is one dwarf galaxy in the area of the constellation. It is called Ursa Minor Dwarf. 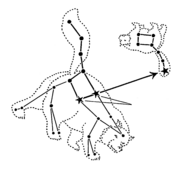 Drawings of Ursa Minor often show it as a baby bear with an unusually long tail. In some stories, the tail is so long because the baby bear was held by the tail and spun around the pole.

Greek mythology connected Ursa Minor and Ursa Major to the story of Callisto and Arcas. However, one older version of the story has Boötes in place of Arcas. In that story Ursa Minor was a dog. This earlier tradition explains both the length of the tail and an older name for Polaris. The North Star used to be called Cynosura which means the dog's tail.

In another story from early Greek mythology, the seven stars of the Little Dipper were seven sisters. They were Atlas' daughters, the Hesperides. They were part of a story with the nearby constellations Boötes, Ursa Major, and Draco.

All content from Kiddle encyclopedia articles (including the article images and facts) can be freely used under Attribution-ShareAlike license, unless stated otherwise. Cite this article:
Ursa Minor Facts for Kids. Kiddle Encyclopedia.