Victoria was one of the nine district electoral areas (DEA) in Belfast, Northern Ireland, from 1985 to 2014, when it was mostly replaced by the Ormiston district.

Located in the east of the city, the district elected seven members to Belfast City Council and contained the wards of Ballyhackamore; Belmont; Cherryvalley; Island; Knock; Stormont; and Sydenham. Victoria, along with wards from the neighbouring Pottinger district and Castlereagh Borough Council, formed the Belfast East constituency for the Northern Ireland Assembly and UK Parliament.

The DEA was created for the 1985 local elections as the successor to the former Area B, which all seven wards in the new Victoria had been part of. An eighth ward, Bloomfield, which had been in Area B, was placed in the new Pottinger electoral area. It will be abolished in 2015, having made way for the new DEAs that were used for the 2014 local elections. It will largely be replaced by the new Ormiston District Electoral Area. Five of Victoria's wards joined Ormiston, with the Sydenham ward and the areas which had been part of the abolished Island ward becoming part of the new Titanic District Electoral Area.

The district contained many key pieces of Belfast's transport infrastructure, including George Best Belfast City Airport and the eastern portion of Belfast Harbour. The area is served by the Bridge End and Sydenham railway stations and the A2 and A20 major road routes. The district is also home to Parliament Buildings, the meeting place of the Northern Ireland Assembly.

Victoria was once the site of much of Belfast's heavy industrial manufacturing facilities, however these have suffered a significant decline since the mid-twentieth century, although companies such as Short Brothers and Harland and Wolff continue to have significant operations in the area.

The wards were redrawn for the 2014 elections and Victoria was replaced with the Ormiston district.

The Titanic Quarter is a major economic and cultural regeneration programme that is centred on Queen's Island and the former Harland and Wolff shipyard. The project has seen the construction of new hotels, apartment blocks and business facilities, with a number of high-profile relocations, including the Public Record Office of Northern Ireland. The area has also become a centre for learning and research with the opening of the Northern Ireland Science Park, in addition to Belfast Metropolitan College moving one of its key city centre campuses to the Quarter, while Queen's University Belfast have also located their Institute of Electronics, Communications and Information Technology (ECIT) within the Science Park. The Quarter's name comes from the RMS Titanic which was constructed in the old shipyard, with a number of projects aimed at exploiting the tourism value of the Titanic's connection to Belfast, including the Samson and Goliath cranes used to construct the ship and the Paint Hall. 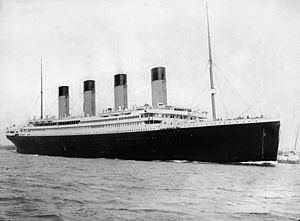 The RMS Titanic, built in Belfast by Harland and Wolff.

Other amenities in the Victoria district electoral area include: 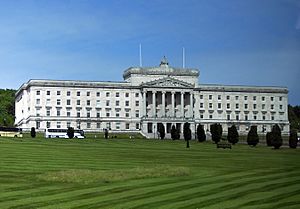 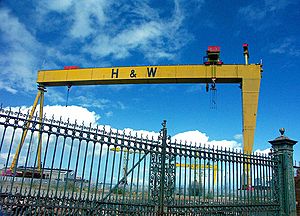 All content from Kiddle encyclopedia articles (including the article images and facts) can be freely used under Attribution-ShareAlike license, unless stated otherwise. Cite this article:
Victoria (District Electoral Area) Facts for Kids. Kiddle Encyclopedia.