Wadena ( wə-DEEN-ə) is a city in Otter Tail and Wadena counties in the State of Minnesota. It is about one hundred sixty miles northwest of the Minneapolis – Saint Paul metro area. The population was 4,088 at the 2010 census. It is the county seat of Wadena County. The town slogan according to popular radio show, The Morning Playhouse, is "Whaa, Wadena?"; in reference to the obvious question as to why anyone would go there.

The first permanent settlement at Wadena was made in 1871. The city is named after Chief Wadena, an Ojibwe Indian chief of the late 19th century in northwestern Minnesota. A post office has been in operation at Wadena since 1873. Wadena was incorporated in 1881. Four properties in Wadena are listed on the National Register of Historic Places: the Commercial Hotel built circa 1885, the Wadena Fire and City Hall built in 1912, the Northern Pacific Passenger Depot built in 1915, and the Peterson-Biddick Seed and Feed Company built 1916–1936. 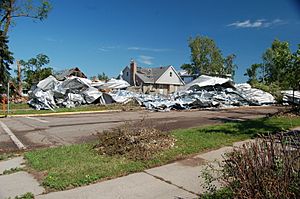 Damage from the tornado

On June 17, 2010, Wadena was hit by an EF-4 tornado that cut a quarter-mile-wide path of destruction through the town. The Wadena tornado was part of the largest single day tornado outbreak in Minnesota state history, 48 tornados were recorded that day. The tornado that struck Wadena was over a mile wide at its peak, packed winds of up to 170 miles per hour, and was on the ground for about 10 miles. At least 232 homes were damaged in the city accounting for roughly 30% of homes in the city. Though no one in the town was killed 34 people were treated for injuries at local hospitals. The Community Center was damaged "beyond repair", and the high school was also severely damaged. Both were later torn down and rebuilt. The city continues to recover with roughly 20 lots abandoned throughout the city. City officials are encouraging rebuilding by offering tax free land incentives. The Wadena Tornado was covered extensively on the December 1, 2010, episode of the Discovery Channel series Storm Chasers.

In the aftermath of the tornado, students from the high school attended classes at the Wadena campus of Minnesota State Community and Technical College, at a previously unused school in nearby Deer Creek (Deer Creek having consolidated with Wadena in 1991), and at the Wadena Elementary School. In order to accommodate the high school students, some early childhood classes at the Elementary School were further moved to Saint Anne's Catholic School. Outdoor athletics were largely unaffected, but home volleyball and basketball games were played in the Elementary School gymnasium. In the year immediately following the tornado, Wadena-Deer Creek's volleyball team capped off a perfect season of 33-0 by capturing the Class 2A championship.

U.S. Highways 10 and 71 and Minnesota State Highway 29 are three of the main routes in the city.

There were 1,840 households of which 26.3% had children under the age of 18 living with them, 39.0% were married couples living together, 11.7% had a female householder with no husband present, 4.3% had a male householder with no wife present, and 44.9% were non-families. 40.2% of all households were made up of individuals and 20.1% had someone living alone who was 65 years of age or older. The average household size was 2.14 and the average family size was 2.86.

There were 1,871 households out of which 25.4% had children under the age of 18 living with them, 44.6% were married couples living together, 9.2% had a female householder with no husband present, and 43.2% were non-families. 37.8% of all households were made up of individuals and 20.3% had someone living alone who was 65 years of age or older. The average household size was 2.20 and the average family size was 2.92.

With over 100 hand-painted murals decorating downtown buildings, Wadena depicts 1,000 years of Minnesota history known as the "Largest Puzzle in the World". The Alley Arts Committee beautified the alleys while creating an interesting tourist attraction. Over 40 artists worked together to finish the collection of 100 puzzle panels. Group guided tours are available along with a map at the train depot.

During the 2015 Christmas season, Wisconsin-based group Freedom From Religion threatened legal action against the city of Wadena over the display of a city-owned nativity in a city park. To avoid a lawsuit, the city sold the nativity to a private buyer who was able to feature it in an even more prominent, privately owned location. As a result of the actions of the Freedom From Religion, many nativity scenes sprang up around the city, estimated to be over 1,000 in total. The former site of the city-owned nativity was rented out a day at a time by individuals who were legally able to display a nativity. The story captured the attention of national media outlets.

All content from Kiddle encyclopedia articles (including the article images and facts) can be freely used under Attribution-ShareAlike license, unless stated otherwise. Cite this article:
Wadena, Minnesota Facts for Kids. Kiddle Encyclopedia.