The Waikato River Trails is a combined walk- and cycleway along the Waikato River. Originally conceived and started by local politicians and trustees, in 2009 the trails became one of the seven Quick Start Projects that form the beginning of the New Zealand Cycle Trail. The trail is proposed to be 100 km long, out of which 50 km existed before the NZCT scheme was created. In mid-2011, work on the last sections of the cycle trail project sections was begun, while the official grand opening occurred early November 2011.

The trails are located in the Waikato Region along the Waikato River. They pass through the districts of South Waikato, Otorohanga and Taupo.

The Whakamaru Christian Camp to Snowsill trail is approximately 3  km long and takes around half an hour to walk. The Whakamaru Camp is also a great place to camp at.

In 2004, a 3 km trail from Arapuni Dam to Jones Landing was opened, marking the start of the construction project.

On 10 November 2009, Prime Minister John Key officially launched the construction of the first New Zealand Cycle Trail project at the Little Waipa Reserve adjacent to the Waikato River. This site, on Horahora Road, has now gone down in history as the spot where turf was first turned on the first of seven of the Government’s Quick Start projects. The first contract was signed in April 2010, assigning $3.4 million from the cycle trail fund to construct the last 41 km of the 100 km distance. In addition, it is estimated that volunteer and in-kind work was donated to a total of $1.5 million.

The opening was scheduled to be in time for the 2010 World Rowing Championships at Lake Karapiro, near Cambridge, New Zealand from 29 October – 7 November. The trail is conservatively attract about 20,000 people per year, with much of the visitors coming from the Auckland and Waikato regions. 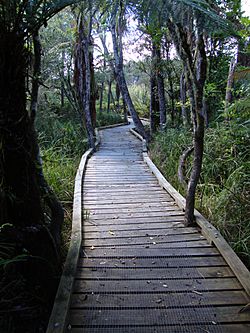 Originally, the trail was envisaged as a walking track only. When users started cycling the sections that had been opened, the scope was widened for the trail to be of dual use for pedestrians and cyclists. For cycling, the target market is family off-road usage with a mountain biking grade of 2–3. One section of the trail at Dunham Creek is suitable for wheelchair access.

The trust also planted 6,000 native trees as part of riparian restoration along the trail, as well as erecting 18 km of fencing to protect the river from direct impacts of dairy farming.

At 425 km, the Waikato River is New Zealand's longest river. The Waikato River has spiritual meaning for various local Māori tribes including the large Tainui, who regard it as a source of their mana or pride.

There are several hydro lakes along this stretch of the Waikato River:

The Arapuni Suspension Bridge, a popular tourist destination with a span of 152 m, is located just downstream from the Arapuni Power Station.

The Taniwha is a Multi Sport Event utilising the WRT. Distances from 7–88 km for bikers, runners and walkers this great event normally runs in November.

All content from Kiddle encyclopedia articles (including the article images and facts) can be freely used under Attribution-ShareAlike license, unless stated otherwise. Cite this article:
Waikato River Trails Facts for Kids. Kiddle Encyclopedia.