Wardle (pop. 7,092) is a village near Littleborough within the Metropolitan Borough of Rochdale, in Greater Manchester, England. It lies amongst the foothills of the South Pennines, 1.8 miles (2.9 km) east-southeast of Whitworth, 2.5 miles (4 km) north-northwest of Rochdale and 12 miles (19 km) north-northeast of the city of Manchester.

Historically a part of Lancashire, Wardle and its surroundings have provided archaeological evidence of Mesolithic activity in the area. The name Wardle is said to be derived from "Ward Hill", implying "fortified place". Brown Wardle Hill overlooks the village from the north, its name being derived from the Celtic word bron meaning "round". During the Middle Ages Wardle was a small centre of domestic flannel and woollen cloth production, and many of the original weavers' cottages survive today as listed buildings.

Wardle, the most northerly settlement in Greater Manchester, encompasses small parts of Smallbridge and Dearnley — urban areas contiguous with Rochdale — but "retains a rural character". Watergrove Reservoir, which is situated on the northern outskirts of Wardle, is the largest of a series of reservoirs in the Borough of Rochdale, with a storage capacity of 720 million gallons. Wardle comprises 17th- and 18th-century stone churches, farmhouses and cottages by the hills. The village square is preserved as a place of historic interest. 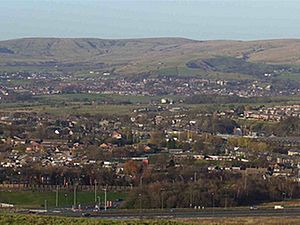 A view over Smallbridge towards Wardle

Wardle is south of the Watergrove Reservoir and west of Littleborough.

The village is home to St James Primary School and a secondary school, Wardle Academy.

All content from Kiddle encyclopedia articles (including the article images and facts) can be freely used under Attribution-ShareAlike license, unless stated otherwise. Cite this article:
Wardle, Greater Manchester Facts for Kids. Kiddle Encyclopedia.