Washington County is a county in the U.S. state of Nebraska. As of the 2010 United States Census, the population was 20,234. Its county seat is Blair.

Washington County is in eastern Nebraska on the Missouri River. It was explored as early as 1739 by Pierre Antoine and Paul Mallet, who were on a trapping expedition to Canada. In 1804, Lewis and Clark reported the establishment of the new United States government to a council of Indian chiefs near the present site of Fort Calhoun. As a result of this Council, Fort Atkinson was established in 1819 and served as a key midwestern outpost until its abandonment in 1827.

The first permanent settlement in Washington County was made in 1854. In that same year, the county was organized as one of the eight original counties proclaimed by acting Governor Thomas B. Cuming; it was later reorganized in 1855. The county seat has been in three different towns: Fort Calhoun, DeSoto, and finally at Blair, its present site since 1869.

Washington County is home to the Blair Municipal Airport and several small privately owned grass airstrips, such as the Orum Aerodrome. The Fort Calhoun Nuclear Generating Station, North America's smallest commercial nuclear reactor by rated capacity, is located south of Blair. An associated system of warning sirens are located in the southeastern part of the county for emergency notification in the event of a problem at the station. An Atlas missile launch site (Site B), formerly associated with Offutt Air Force Base and deactivated in the 1960s, is situated to the east of Arlington. 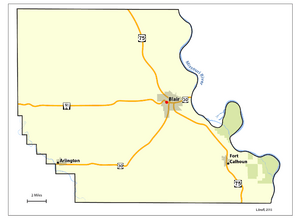 All content from Kiddle encyclopedia articles (including the article images and facts) can be freely used under Attribution-ShareAlike license, unless stated otherwise. Cite this article:
Washington County, Nebraska Facts for Kids. Kiddle Encyclopedia.