Watertown is a town in Litchfield County, Connecticut, United States. The population was 22,514 at the 2010 census. The zip code for Watertown is 06795. It is a suburb of Waterbury. It borders the towns of Woodbury, Middlebury, Litchfield, Plymouth, Bethlehem, and Thomaston.

More than 310 years ago the area that is now Watertown belonged to the local Paugasuck Indians. But in 1684, Thomas Judd and 35 other proprietors bought the land from the Indians and town history began.

It is in the Eastern Standard time zone. Elevation is 620 feet.

According to the United States Census Bureau, the town has a total area of 29.6 square miles (76.6 km²), of which, 29.1 square miles (75.5 km²) of it is land and 0.4 square miles (1.1 km²) of it (1.45%) is water. Watertown also includes the section known as Oakville, which is often mistaken for a separate town. Although Oakville has its own post office and ZIP code, it does not have a charter or town government of its own. Oakville also receives all of its city services (Police, fire, water and so on) from Watertown.

There were 8,046 households out of which 34.7% had children under the age of 18 living with them, 61.7% were married couples living together, 9.4% had a female householder with no husband present, and 25.5% were non-families. 21.7% of all households were made up of individuals and 9.4% had someone living alone who was 65 years of age or older. The average household size was 2.67 and the average family size was 3.13.

The Route 8 expressway runs through the eastern edge of town, with two exits inside the town. The main routes through the town center are Route 6 running east-west and Route 63 running north-south. Other important highways include Route 73 (a more direct route to Waterbury), and Route 262. Public transportation is provided by buses of Northeast Transportation Company. 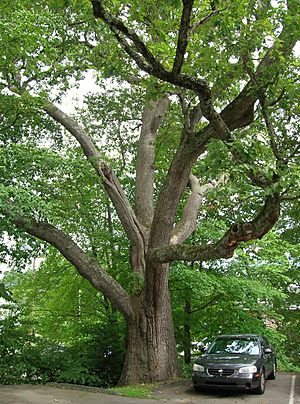 All content from Kiddle encyclopedia articles (including the article images and facts) can be freely used under Attribution-ShareAlike license, unless stated otherwise. Cite this article:
Watertown, Connecticut Facts for Kids. Kiddle Encyclopedia.