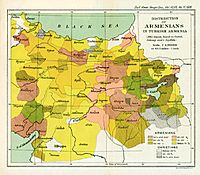 Distribution of Armenians in Turkish Armenia.

After Turkish-Persian wars of 1602-1639 Western Armenia became part of Ottoman Empire. Since Russo-Turkish War, 1828-1829 that term is referred to the Armenian-populated historical regions of the Ottoman Empire that remained under Ottoman rule after the eastern part was ceded to the Russian Empire.

Western (Ottoman) Armenia was composed of six vilayets (vilâyat-ı sitte), the vilayets of Erzurum, Van, Bitlis, Diyarbekir, Kharput, and Sivas. After the collapse of Ottoman Empire Western Armenia remained under Turkish rule, and in 1894–96 and 1915 Turkey perpetrated systematic massacres and forced deportations of Armenians.

All content from Kiddle encyclopedia articles (including the article images and facts) can be freely used under Attribution-ShareAlike license, unless stated otherwise. Cite this article:
Western Armenia Facts for Kids. Kiddle Encyclopedia.