Mosborough ward — which includes the districts of Halfway, Mosborough village, Waterthorpe, and Westfield — is one of the 28 electoral wards in City of Sheffield, England. It is located in the eastern part of the city, on the border with Rotherham, and covers an area of 8.9 km2. The population of this ward in 2001 was 16,300 people in 7,000 households, the ward population increasing to 17,097 at the 2011 Census. It is one of the wards that make up the Sheffield South East constituency. The area is often referred to as Mosborough Townships. The population of the town increased to 17,097 in 2011 and is made up of 7,579 Households. 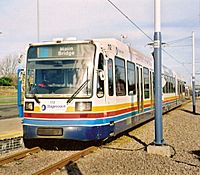 Halfway (grid reference SK432809) lies in the extreme southeast of Sheffield at the end of a Sheffield Supertram line. Halfway is part of the historic county of Derbyshire but has been administered by Sheffield since boundary changes in 1967.

It used to be home to a bus garage which was operated by 'Booth and Fisher', a company who were merged into the South Yorkshire Passenger Transport Executive in the mid-1970s. The garage itself passed into the hands of operator 'SYT', then to the First and has always been seen as a minor outpost garage. It served works and school services and buses starting early from the south side of the city. The garage was closed in 2007, as a cost-cutting measure. Recently it was taken over by the Chesterfield based company TM Travel.

It is common to see public transport in Sheffield heading for "Halfway". The Blue Route Sheffield Supertram terminates at Halfway with a large Park and Ride facility. The main service to and from Halfway to and from the city centre is the 120 service, jointly operated by both Stagecoach Sheffield and First South Yorkshire.

The Halfway housing estate is something of a unique experiment. Built in 1975, the estate centred in the small local shopping centre called 'Streetfields'. The houses themselves were built on high quality farmland and to this day are farmers with orchards nearby.

The Sheffield City Council is a keen recycler and burn a lot of domestic refuse which in turn is converted to hot water used for both domestic supply and central heating. This is pumped from Bernard Road in S2 to Halfway and links directly with the homes in the Halfway locality. Well-insulated and often compact, these homes are noticeably energy-efficient.

The layout of the estate was such that no house would look directly onto another, with properties curving around meandering walkways and a complex network of through routes to Halfway Drive. This main road is the thoroughfare linking the village to both the Derbyshire county boundary and neighbouring estates of Westfield and Waterthorpe.

Despite being a well-planned and high-quality overall project, the estate today suffers in part from crime and has been called, on the Sheffield City Council website, as an area to work actively towards safer communities.

Holbrook was a mining village whose name was changed to Halfway (after the Halfway House pub) to avoid confusion with Holbrook near Derby.

Mosborough (grid reference SK426813) is part of the historic county of Derbyshire but has been administered by Sheffield since boundary changes in 1967 and is now considered a suburb of Sheffield. It was known for sickle making and was also a coal mining area. Notable buildings include the fifteenth century Mosborough Hall, a building which may retain some Anglo-Saxon structure. Mosborough Town had a population of 4,063 in 2011.

Mosborough a small village in the 1930s and 1940s Had many more drinking places than the seven listed below. They were:

In the Kellys Directory there were several other places with licences to sell ale. These were not designated as public houses.

The original village of Mosborough now only has five pubs due to The Wheel been demolished for housing and The Vine been closed down and turned into a curry house using The Vine as its name, it still has one working men's club:

The working men's club is the CIU affiliated Miners Welfare.

On August Bank Holiday, the locals do a pub crawl known as the Mosborough 10 for charity often in fancy dress. It has been known for people to come from as far away as Blackpool to take part in this event.

The Mosborough 10 pub crawl travels from pub to pub:

The Waterthorpe and Westfield housing estates were built from mid-1970s and were added to over a number of years. Eventually linking with both the old council estate of Beighton and the new estate of Halfway, the estates house a condensed significant number of almost wholly local authority owned properties following the phasing down and demolition of the original estates around Parson Cross and Shiregreen in the north of the City. 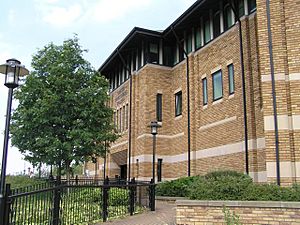 There are many pubs in Beighton, The most popular being The Gypsy Queen built in 1998 (Now run by Hungry Horse), The Fox on Skelton Lane, The George and Dragon, The Cumberland both being on Beighton's High street and finally The Belfry which is on Eckington Road within the Sothall estate, Featuring a bell extracted from a church.

The Crystal Peaks shopping centre was opened in 1988 to serve the south side of the city. Its original design included markets and fixed national chains including a UCI Cinema. Crystal Peaks originally had a ski theme, When one was in the central atrium there was a cable car and skiing mannequins suspended from the glass roof. The centre has always had a petrol station formerly run by BP, and up until recently was open 24-hours. Crystal Peaks was one of the most popular Shopping Centres in the country, but over time popularity and investment was falling due to the opening of Meadowhall Centre in the north of the city in September 1990. In 1998 Crystal Peaks underwent an extension called "Crystal Peaks 2" covering the west Atrium from the market downwards, where the original Playground was right down to the bus station. The Playground was moved to the east atrium near the petrol station. Later on between 2005 and 2008 the centre underwent even more developments. The Sainsburys which was originally on the north side of the centre, was moved into much larger, newly built premises which include a car park on the roof, in the southern wing of the centre on the former site of the cinema.

When the new store opened the BP 24 Hour petrol station was taken over by Sainsbury's and the opening hours reduced to 7am to 11pm. This development has been done to compete effectively with Meadowhall and Sheffield city centre.

As for Waterthorpe and Westfield estates, leisure facilities are lacking as the council concentrated upon housing and not the substantial areas of parkland in most other areas of Sheffield. 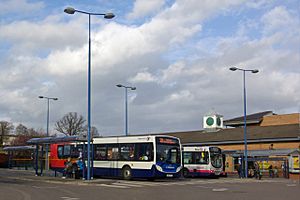 The bus station is situated at Peak Square, Crystal Peaks centre and is about 55 yards (50 m) away from the Sheffield Supertram stop.

There are eight stands at the bus station and the main operators include First South Yorkshire, Stagecoach Sheffield, Stagecoach East Midlands and TM Travel.

Buses go from the bus station towards Sheffield, Rotherham, Eckington and Worksop.

Westfield is one of the Mosborough "Townships", smallish self-contained communities that have yet to develop into communities. It is on the fringes of Sheffield, overlooks Derbyshire and is surrounded to the north by quite densely populated housing and to the south by open countryside. It has a small but well-equipped shopping centre.

The housing is mixed with private estates interwoven with public sector housing which was originally aimed at the more vulnerable and/or elderly tenants. In about 2006, the local primary school "Shortbrook School", the community centre and the doctor's surgery were burnt out. The surgery was, for a while moved to Owlthorpe then housed in a small green portakabin not far from the original site. Recently the central surgery has been reopened and the portakabin still stands there, unused. Shortbrook Primary has reopened and will have largely new staff from September 2008. Westfield Secondary School was relocated from its former position in Mosborough village and opened its doors on the border of Westfield in 2007. There are still problems with the community facilities.

Recently the former "Golden Keys" public house has been turned into a local community centre or youth "club" in Westfield centre.

The council has now agreed to invest in the recovery of Westfield. They are investing about £50,000. The local Co-op are also investing, as are the Primary Care Trust.

All content from Kiddle encyclopedia articles (including the article images and facts) can be freely used under Attribution-ShareAlike license, unless stated otherwise. Cite this article:
Mosborough (ward) Facts for Kids. Kiddle Encyclopedia.