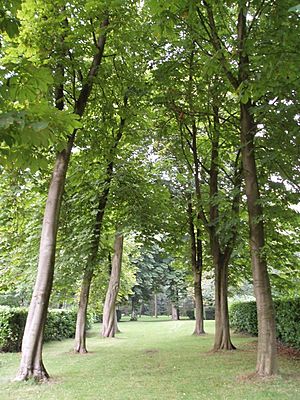 Whipsnade Tree Cathedral is a 9.5-acre (3.8 ha) garden in the village of Whipsnade in Bedfordshire, England. It is planted in the approximate form of a cathedral, with grass avenues for nave, chancel, transepts, chapels and cloisters and "walls" of different species of trees.

The tree cathedral was planned by Edmond Blyth in the 1930s as an act of "Faith, hope and reconciliation" in response to his memories of World War I. As a cadet at Sandhurst in 1916 Blyth had made close friends called Arthur Bailey, John Bennett and Francis Holland who were all killed prior to the end of the war. In 1930 he paid a visit to Liverpool Cathedral, which was then under construction. Blyth wrote: "As we drove south through the Cotswold hills on our way home... I saw the evening sun light up a coppice of trees on the side of a hill. It occurred to me then that here was something more beautiful still and the idea formed of building a cathedral with trees." Work began in 1932 and continued in stages. The site became overgrown during World War II, but development recommenced after the end of the war. The first religious service at the site was held in 1953, and services continue to this day. 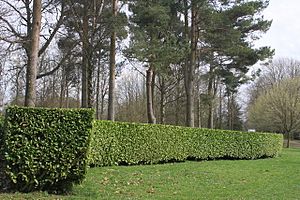 The outer "wall" of the cathedral

In 1960 the Tree Cathedral was accepted as a gift by the National Trust. The independent Whipsnade Tree Cathedral Fund is responsible for the religious use of the site. Services have been conducted by many different denominations. It is Grade II listed on the Register of Historic Parks and Gardens.

The Tree Cathedral contains chapels meant for each of the four seasons. 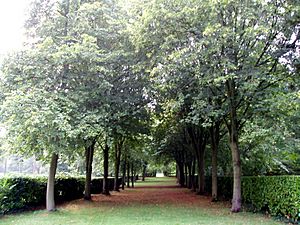 The Nave of Whipsnade Tree Cathedral

The cathedral incorporates the following trees.

All content from Kiddle encyclopedia articles (including the article images and facts) can be freely used under Attribution-ShareAlike license, unless stated otherwise. Cite this article:
Whipsnade Tree Cathedral Facts for Kids. Kiddle Encyclopedia.