William Edward Joyce (born December 11, 1957) is an American writer, illustrator, and filmmaker. His illustrations have appeared on numerous covers of The New Yorker and his paintings are displayed nationwide. For the short film The Fantastic Flying Books of Mr. Morris Lessmore (2011), Joyce won the Academy Award for Best Animated Short Film at the 84th Academy Awards.

He has written and illustrated over fifty children's books including George Shrinks, Santa Calls, Dinosaur Bob and his Adventures with the Family Lazardo, Rolie Polie Olie, The Leaf Men and the Brave Good Bugs and A Day with Wilbur Robinson.

Joyce is currently working on a series of novels and picture books, The Guardians of Childhood, consisting of a total of 13 books.

Joyce has received three Emmys for Rolie Polie Olie, an animated series based on his series of children's books that aired on the Disney Channel. His second television series, George Shrinks, used to air daily on PBS stations.

In 2001, after Joyce and Ice Age director Chris Wedge failed to adapt one of Joyce's books to the screen, Santa Calls, they both came up with the idea for the animated film Robots (2005). Besides being one of the creators, Joyce also served as a producer and production designer.

In 2005 Joyce and Reel FX launched a joint venture, Aimesworth Amusements, to produce feature films, video games and books. The new company announced plans to make three feature films: The Guardians of Childhood, The Mischevians, and Dinosaur Bob and His Adventures With the Family Lazardo. The first of those projects, The Guardians of Childhood was developed by DreamWorks Animation into the feature film, Rise of the Guardians. It was released in 2012 and is based on Joyce's book series and the short film Man in the Moon, directed by Joyce.

In 2007, Disney released Meet the Robinsons, a movie based on his book A Day with Wilbur Robinson, to which Joyce served as one of the executive producers of the film along with John Lasseter and Clark Spencer.

In August 2009, Joyce and Reel FX co-founder Brandon Oldenburg founded a Shreveport-based animation and visual effects studio MOONBOT Studios. The studio produced an Oscar-winning animated short film and an iPad app The Fantastic Flying Books of Mr. Morris Lessmore. A book adaption was released in summer 2012. The studio released in January 2012 another app, Numberlys, with a short film and a book announced to come later.

His book The Leaf Men was adapted by Blue Sky Studios into a 2013 computer-animated feature film titled Epic, with Joyce as writer, executive producer, and production designer.

In both 1994 and 1995 Joyce’s Santa Calls books were inspiration for the Christmas displays for Saks Fifth Avenue on 5th Avenue.

The World of William Joyce

This exhibition is run by the National Center for Children's Illustrated Literature. It began in 1998 and is currently still traveling nationally.

Artspace is a gallery located in Shreveport that is run under the guidance of the Shreveport Regional Arts Council. Joyce serves as the Artistic Director. He has helped bring a Peter Pan Centennial exhibit, an Art of Robots exhibit, and Faces of Katrina.

In 2006, Joyce founded the Katrinarita Gras Foundation to raise money for victims of Hurricanes Katrina and Rita. He is selling prints of his unpublished Mardi Gras The New Yorker cover through the foundation with all profit going to Louisiana artists and arts organizations. 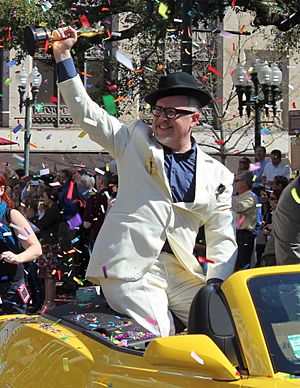 Joyce in March 2012 holding an Oscar for his short film The Fantastic Flying Books of Mr. Morris Lessmore during a parade in his and Brandon Oldenburg's honor held in downtown Shreveport.

Joyce received the 2008 Louisiana Writer Award for his enduring contribution to the "literary intellectual heritage of Louisiana." The award was presented to him on October 4, 2008, during a ceremony at the 2008 Louisiana Book Festival in Baton Rouge. On February 26, 2012, he won an Academy Award for Best Animated Short Film, "The Fantastic Flying Books of Mr. Morris Lessmore."

Newsweek called him one of the top 100 people to watch in the new millennium.

Bill Joyce lives with his son Jackson Edward Joyce in Shreveport, Louisiana. His daughter, Mary Katherine, died from a brain tumor at the age of 18 on May 2, 2010. Rise of the Guardians, a film inspired by stories Joyce told her while young and later resulted in The Guardians of Childhood book series, was dedicated to her memory, reading “For Mary Katherine Joyce, a Guardian Fierce and True” during the credits. The main character of Epic, which is also based on Joyce's book, The Leaf Men and the Brave Good Bugs, was named after her. His wife, Frances Elizabeth Baucum Joyce, who was a Shreveport attorney, died on January 20, 2016 at the age of 55, after a long battle with amyotrophic lateral sclerosis.

In May 2017, Atheneum Young Readers released the picture book "Bently & Egg," A Day With Wilbur Robinson, of which the film version is entitled Meet the Robinsons, and Dinosaur Bob and His Adventures with the Family Lazardo. All are under the label "The World of William Joyce."

Note: All books are written and illustrated by William Joyce, except as noted

Peakaboo You!
Rolie Polie Shapes
Be My Pal!
Rocket Up, Rolie!

The Guardians of Childhood series

All content from Kiddle encyclopedia articles (including the article images and facts) can be freely used under Attribution-ShareAlike license, unless stated otherwise. Cite this article:
William Joyce (writer) Facts for Kids. Kiddle Encyclopedia.