Kids Encyclopedia Facts
This page is about the town in Essex, England. For other uses, see Witham (disambiguation).

Witham is a town in the county of Essex in the East of England, with a population (2011 census) of 25,353. It is part of the District of Braintree and is twinned with the town of Waldbröl, Germany. Witham stands between the city of Chelmsford (8 miles to the south-west) and the town of Colchester (13 miles to the north-east), on the Roman road between the two. The River Brain runs through the town and joins the River Blackwater just outside.

Excavations by Essex County Council field archaeological unit at the recent Maltings Lane development discovered evidence of Neolithic occupation at Witham, including human remains and several trackways across ancient marsh. Excavations of the Witham Lodge (Ivy Chimneys) area of the town in the 1970s unveiled remains of a Roman temple as well as a pottery kiln. This would have been alongside the main Roman road from Colchester to London and used as a stopover point on the long journey. Another notable find during the excavation was a votive offering pool in the grounds of the temple, containing several artefacts that would have been offered to the gods. In 913, according to the Anglo-Saxon Chronicle, Edward the Elder marched from Hertford to reconquer Essex, and encamped in Witham on his route to set up a base at Maldon. Witham's position on the Roman road in relation to the major Viking army based at Colchester was the most likely reason for this, and it would have effectively cut Essex in two.

The name Witham is a composite name, part Brythonic (probably from a cognate of Gwydd = "Woods" in modern Welsh) and "ham" a typical Saxon ending, and remains unchanged in spelling. The parish of Witham appears in the Domesday Book of 1086. The manor of Witham was given to the Knights Templar in 1148. To the north of the current town is Cressing Temple which was the earliest foundation of Templar lands in Britain, built over 700 years ago.

The town as it is now started life on 'Chipping Hill', where the old forge and the church still exist to this day. As the years went by, the hamlet grew to become 'Witham' and St Nicolas's Church of England Church (a unique spelling) serves a congregation of around 150 people each Sunday. During the latter half of the 18th century and the early 19th century, Admiral Sir William Luard was the town's most prominent citizen, a resident of Chipping Hill and a founder and patron of St Nicolas's Church. His funeral cortège through the town in 1910 was witnessed by thousands.

In the 18th century, Witham briefly enjoyed a period as an affluent spa town after the discovery of a mineral-bearing spa by a Dr Taverner. Witham was also a centre of the wool trade until the decline of the industry in the late 17th century. 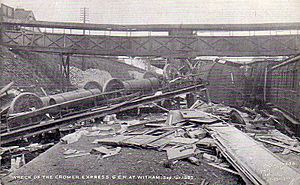 Witham railway station was the scene of a serious accident on Saturday 1 September 1905. The 09:27 London Liverpool Street to Cromer 14-coach express derailed whilst travelling at speed through the station. Ten passengers and a luggage porter were killed when several of the carriages somersaulted on to the platforms causing considerable damage to the rolling stock and the station. Seventy-one passengers were seriously injured. It remains to this day the worst single loss of life in a railway accident in Essex. In 2005, an opportunity to commemorate the centenary was missed and the incident is now largely forgotten. Ben Sainty, a signalman, whose quick action averted the next train hitting the wreckage has a road named after him in the town, Ben Sainty Court.

The town expanded greatly in the late 1960s and 1970s when the Greater London Council built three large council estates on the west and north sides of the town, and a smaller one to the south, for families from London to move to as part of the 'New Town' and 'Expanded Town' overspill policy of that time.

A famous one-time resident of the town was the author Dorothy L. Sayers, whose statue stands opposite the town's library, which is a short distance from the author's house. The library stands on the site of the old Whitehall cinema, which closed in the late 1970s.

Witham has grown in size after the development of the Maltings Lane estate to the south of the town between 2002 and 2003. This was followed in 2012 by the moving of the Chipping Hill Primary School from its old premises in Church Street to newly-built premises in Owers Road. The development of this area has continued, including the opening in 2015 of an Aldi superstore.

Approved developments include the reconstruction of both the New Rickstones Academy, and the Maltings Academy, completed in 2011; the Marston's pub and restaurant on Gershwin Boulevard completed in 2013 and the adjacent Seymour House day nursery; the refurbishment and opening of a Morrisons store in the old premises of the Jack & Jenny pub in 2014; and the newly built Witham Leisure Centre on Spinks Lane, replacing Bramston Sports Centre, completed in 2014.

The town is served by Witham railway station, situated on the Great Eastern Main Line operated by Abellio Greater Anglia. Trains take approximately 40–45 minutes to reach Liverpool Street. The station is also the junction for the Braintree branch line to Braintree. Another branch line, now dismantled, went from Witham to Maldon.

Witham is situated on the A12 trunk road between Chelmsford and Colchester, that is to say the Roman road from London to Colchester. Originally the A12 ran in a straight line through the middle of the town; however for some decades there has been a by-pass completely avoiding the town.

Witham is on National Cycle Route 16.

Because of the excellent transport links the town has a large number of residents who commute to work in London. This is evident by Witham railway station's appearance within the 150 busiest railway stations in Great Britain, which would not be expected based on the town's population alone.

There is also a rugby club situated behind the football ground.

Witham also has a hockey club formed in 1924 and is now made up of 5 men's teams and 3 women's teams. Witham also participates in the local mixed league as well as the men's and women's summer league and indoor league. Witham hockey club play on the astro turf across the road from Maltings Academy on Spinks Lane. The hockey club share a clubhouse with the cricket club which is situated next to the recreation ground, commonly known as the Maldon Road Park, on Maldon Road.

Leisure facilities include Benton Hall Golf and Country Club, a pool club, and a library which occupies the site of what was the town's long-closed cinema, the Whitehall. A 'River Walk' runs for three-and-a-half miles through the town and is home to a range of wildlife. Witham Leisure Centre is located in Spinks Lane, adjacent to the former Bramston Sports Centre.

Witham has a mainly linear town centre focused on the high street and two shopping precincts to form a cross that bisects the high street – the Newlands Shopping Centre of 1970s design to the north, and the Grove Centre of a 1980s brick design to the south. There are also a range of small shops, restaurants, pubs, major high-street banks and several national commercial chains. The town also has five supermarkets; Tesco in the Grove Center, Morrisons near the railway station, Asda on Highfields Road, Aldi at the southern entrance to the town and Lidl that recently opened towards the centre of town on the old Bramston sports centre site.

A significant industrial presence remains in the town, concentrated on three industrial estates on the eastern side of the town close to the junction with the A12. There are also commercial offices located in the town centre area.

In March 2007, Crittall Windows closed its Braintree factory and returned to Witham to occupy a new factory on the Freebournes Industrial Estate. The factory Crittall moved into was built for J.L. French in 2001, but never used for production. The new Crittall factory is visible on the right hand side of the road exiting Witham towards Colchester via the A12.

In December 2013, the financial service provider Cofunds relocated to the former Marsh building on the Grove, bringing approximately 600 jobs to the town.

The Chatten free school is a special educational needs school which opened in 2021. The school provides up to 75 places to pupils from across Essex with severe, complex autism.

All content from Kiddle encyclopedia articles (including the article images and facts) can be freely used under Attribution-ShareAlike license, unless stated otherwise. Cite this article:
Witham Facts for Kids. Kiddle Encyclopedia.