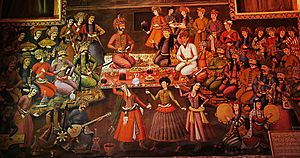 Shah Abbas II holding a feast for foreign diplomats. This is painted on a ceiling at the Chehel Sotoun Palace in Isfahan.

Shah Abbas II (born 31 December 1632; died 25/26 October 1666) was Shah of Iran from 1642 to 1666. He was the seventh Shah of the Safavid Dynasty. He was the son of Shah Safi I and a Circassian, Anna Khanum. His name was Sultan Muhammed Mirza until he became Shah on May 15, 1642. Since he was less than ten years old when he became shah, the job of governing Persia was given to the grand vizier Saru Taqi.

Saru Taqi tried to end corruption. He made many enemies. On October 11, 1645 he was killed by a group of army officers. Then Khalifa Sultan became grand vizier until his death in 1653 or 1654.

Abbas' reign was mostly peaceful. It was important for not having any Ottoman attacks. In 1648 Abbas conquered Kandahar. He kept it from attacks by Mughal India. He died in Khusruabad near Damghan on the night of 25–26 October 1666.

All content from Kiddle encyclopedia articles (including the article images and facts) can be freely used under Attribution-ShareAlike license, unless stated otherwise. Cite this article:
Abbas II of Persia Facts for Kids. Kiddle Encyclopedia.