It is the largest and most developed city in Kerman Province and the most important city in the southeast of Iran. It is also one of the largest cities of Iran in terms of area. Kerman is famous for its long history and strong cultural heritage. The city is home to many historic mosques and Zoroastrian fire temples.

Kerman became the capital city of Iranian dynasties several times during its history. It is located on a large, flat plain, 800 km (500 mi) south-east of Tehran, the capital of Iran. For Iranian paleontologists, Kerman has always been considered a fossil paradise. The discovery of new dinosaur footprints in 2005 renewed hopes for better understanding the history of this area. 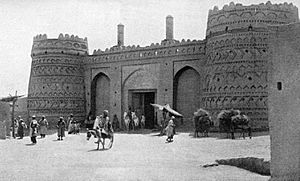 The Masjid gate through which Agha Mohammad Khan entered the city

Kerman was founded as a defensive outpost by Ardashir I, founder of the Sasanian Empire, in the 3rd century AD. After the Battle of Nahāvand in 642, the city came under Muslim rule. At first the city's relative isolation allowed Kharijites and Zoroastrians to thrive there, but the Kharijites were wiped out in 698, and the population was mostly Muslim by 725.

Under the rule of the Seljuq Turks in the 11th and 12th centuries, Kerman remained virtually independent, conquering Oman and Fars. When Marco Polo visited Kerman in 1271, it had become a major trade emporium linking the Persian Gulf with Khorasan and Central Asia.

Due to this the city was sacked (looted) many times by various invaders. Kerman expanded rapidly during the Safavid dynasty. Carpets and rugs were exported to England and Germany during this period.

In 1793 Lotf Ali Khan defeated the Qajars, and in 1794 he captured Kerman. But soon after he was surrounded by armed forces in Kerman for six months by Agha Mohammad Khan Qajar. When the city fell to Agha Mohammad Khan, angered by the popular support that Lotf Ali Khan had received, many of the male inhabitants were killed, women and children were sold into slavery and in ninety days the city turned into ruins. The Zoroastrians of Kerman who had been strong supporters of Lotf Ali Khan suffered the wrath of the founder of Qajar dynasty the most during this period.

The present city of Kerman was rebuilt in the 19th century to the northwest of the old city, but the city did not return to its former size until the 20th century. 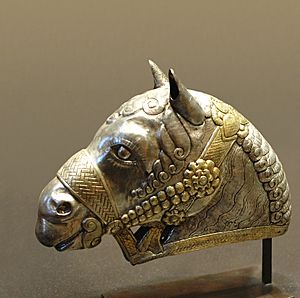 The economy of Kerman is mostly based on farming, notably nut farming and also mining. Sarchashmeh Copper mine is the second biggest copper mine in the world. Pistachios are an important part of the economy in Kerman, with Kerman Province being the largest producer of pistachios in Iran and the world.

Carpet weaving is one of the main industries of the city, and the carpets produced there are renowned internationally. Carpet weaving is a very old tradition in Kerman. The oldest carpet discovered in Kerman, dates from about 500 years ago. Cotton textiles and goats-wool shawls are also manufactured. A number of modern establishments such as textile mills and brickworks also have been constructed. The province's mineral wealth includes copper and coal.

Kerman is one of the leading cities in Iran in the field of health and many people from neighboring provinces visit the city for medical care. 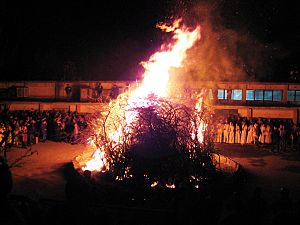 Kerman is among several cities in Iran with a strong cultural heritage, which is expressed in the local accent, poetry, local music, handicrafts and customs that Kerman has introduced to the world.

The only anthropology Iran museum of Zoroastrians in the world, which showcases the ancient history of Zoroastrians, is in Kerman’s Fire Temple. The museum was officially inaugurated in 2005 by Iran’s Cultural Heritage, Handicrafts and Tourism Organization (ICHHTO). 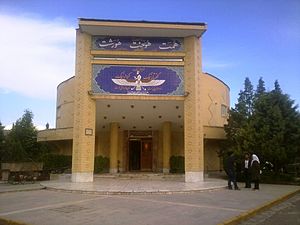 Jashn-e Tirgan or Tiregan is an ancient Iranian rain festival observed on July 1. The festivity refers to archangel Tir (literally meaning arrow) or Tishtar (lightning), who appear in the sky to generate thunder and lightning for providing much needed rain. The Sadeh ceremony is celebrated every year in Kerman.

Some of the handicrafts and souvenirs of the province of Kerman are traditional embroidery known as pateh, carpets, rugs, jajeems, Kilims (a coarse carpet), satchels, and other hand woven articles. Caraway seeds and pistachio of Rafsanjan and Kerman are best of the main items of this province.

All content from Kiddle encyclopedia articles (including the article images and facts) can be freely used under Attribution-ShareAlike license, unless stated otherwise. Cite this article:
Kerman Facts for Kids. Kiddle Encyclopedia.