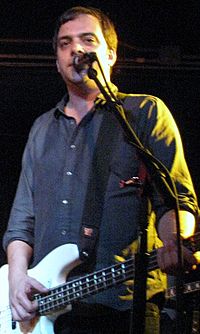 Adam Lyons Schlesinger (October 31, 1967 – April 1, 2020) was an American singer-songwriter, record producer, and guitarist. He won three Emmys, a Grammy, and the ASCAP Pop Music Award. He was nominated for an Oscar, Tony Award and Golden Globe for best original song in 1997.

His best known work was writing and co-producing the title song to That Thing You Do!. He composed "Master Of The Seas" for Ice Age: Continental Drift performed by Jennifer Lopez, Peter Dinklage and others. He wrote and produced three songs for Music and Lyrics. He also wrote "Stacy's Mom".

He was a founding member of the bands Fountains of Wayne, Ivy, and Tinted Windows. He is a key songwriter and producer for Brooklyn-based synth-pop duo Fever High.

Schlesinger grew up in Manhattan and Montclair, New Jersey. He studied at Williams College.

On March 31, 2020, Schlesinger was diagnosed with COVID-19 and hospitalized under critical condition. He died from the infection the following day in Poughkeepsie, New York at the age of 52.

All content from Kiddle encyclopedia articles (including the article images and facts) can be freely used under Attribution-ShareAlike license, unless stated otherwise. Cite this article:
Adam Schlesinger Facts for Kids. Kiddle Encyclopedia.