The Afghan Hound is a hound that is distinguished by its thick, fine, silky coat and its tail with a ring curl at the end. The breed is selectively bred for its unique features in the cold mountains of Afghanistan. Other names for this breed are Tāzī, Balkh Hound, Baluchi Hound, Barakzai Hound, Shalgar Hound, Kabul Hound, Galanday Hound or sometimes incorrectly African Hound. They have the ability to run and turn well. 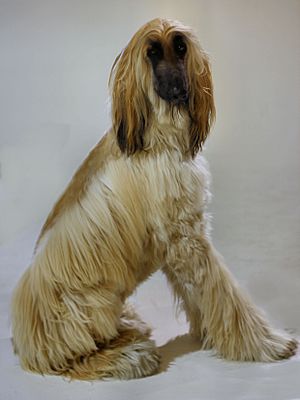 Young dog. Many individuals have a black facial mask. 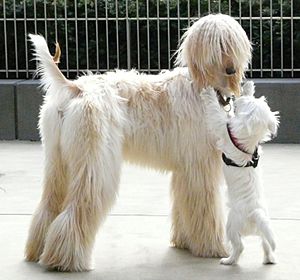 The coat may be any colour. Light cream coated Afghan Hound 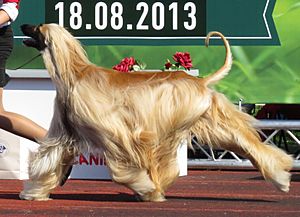 Afghan Hound in the ring

The Afghan Hound has been identified as a basal breed that predates the emergence of the modern breeds in the 19th century. It is most closely related to the Saluki.

Connections with other types and breeds from the same area may provide clues to the history. A name for a desert coursing Afghan hound, Tazi (Sag-e-Tazi), suggests a shared ancestry with the very similar Tasy breed from the Caspian Sea area of Russia and Turkmenistan. Other types or breeds of similar appearance are the Taigan from the mountainous Tian Shan region on the Chinese border of Afghanistan, and the Barakzay, or Kurram Valley Hound.

There are at least 13 types known in Afghanistan, and some are being developed (through breeding and record keeping) into modern purebred breeds.

Once out of Afghanistan, the history of the Afghan Hound breed became entwined with that of the very earliest dog shows and the Kennel Club (UK). Various sighthounds were brought to England in the 1800s by army officers returning from British India (which at the time included), Afghanistan, and Persia, and were exhibited at dog shows, which were then just becoming popular, under various names, such as Barukzy hounds. They were also called "Persian Greyhounds" by the English, in reference to their own indigenous sighthound.

One dog in particular, Zardin, was brought in 1907 from India by Captain Bariff, and became the early ideal of breed type for what was still called the Persian Greyhound. Zardin was the basis of the writing of the first breed standard in 1912, but breeding of the dogs was stopped by World War I.

Out of the longhaired sighthound types known in Afghanistan, two main strains make up the modern Afghan Hound breed. The first were a group of hounds brought to Scotland from Balochistan by Major and Mrs. G. Bell-Murray and Miss Jean C. Manson in 1920, and are called the Bell-Murray strain. These dogs were of the lowland or steppe type, and are less heavily coated.

The second strain was a group of dogs from a kennel in Kabul owned by Mrs. Mary Amps, which she shipped to England in 1925. She and her husband came to Kabul after the Afghan war in 1919, and the foundation sire of her kennel (named Ghazni) in Kabul was a dog that closely resembled Zardin. Her Ghazni strain were the more heavily coated mountain type. Most of the Afghans in the United States were developed from the Ghazni strain from England. The first Afghans in Australia were imported from the United States in 1934, also of the Ghazni strain. The French breed club was formed in 1939 (FALAPA). The mountain and steppe strains became mixed into the modern Afghan Hound breed, and a new standard was written in 1948, which is still used today.

The Afghan Hound can also come with a much more "patterned" coat. This descends from the Bell-Murray's and the Ghazni lines, and is displayed in much lighter feathering of coat, deeper saddle (often actually looking like a saddle) and much shorter hair on the face and neck. It is believed that these particular Afghan Hounds were a product of much hotter parts of the country.

The beauty of Afghan Hound dogs caused them to become highly desirable show dogs and pets, and they are recognised by all of the major kennel clubs in the English-speaking world. One of the Amps Ghazni, Sirdar, won BIS at Crufts in 1928 and 1930. An Afghan hound was featured on the cover of Life Magazine, November 26 1945. Afghan Hounds were the most popular in Australia in the 1970s, and won most of the major shows. An Afghan Hound won BIS (Best in Show) at the 1996 World Dog Show in Budapest. Afghan hounds were BIS at the Westminster Kennel Club Dog Show in 1957 and again in 1983. That win also marked the most recent win at Westminster for breeder-owner-handler, Chris Terrell.

The Afghan Hound breed is no longer used for hunting, although it can be seen in the sport of lure coursing. 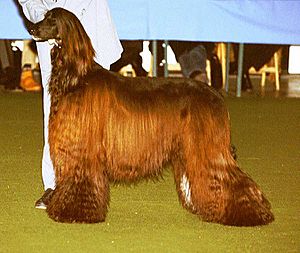 This Afghan hound is black and brindle; however, the photo shows it with a reddish tinge to the coat, which can occur in a black-coated dog.

The Afghan Hound is tall, standing in height 61–74 cm (24–29 in) and weighing 20–27 kg (44–60 lb). The coat may be any colour, but white markings, particularly on the head, are discouraged; many individuals have a black facial mask. A specimen may have facial hair that looks like a Fu Manchu mustache, sometimes called "mandarins". Some Afghan Hounds are almost white, but parti-color hounds (white with islands of red or black) are penalized in the AKC standard, but not by the FCI.

Their long, fine-textured coat requires considerable care and grooming. The long topknot and the shorter-haired saddle on the back of the dog are distinctive features of the Afghan Hound coat. The high hipbones and unique small ring on the end of the tail are also characteristics of the breed.

The temperament of the typical Afghan Hound can be aloof and dignified, but happy and clownish when playing. This breed, as is the case with many sighthounds, has a high prey drive and may not get along with small animals. The Afghan Hound can be a successful competitor in dog agility trials as well as an intuitive therapy dog and companion. Genomic studies have pointed to the Afghan Hound as one of the oldest of dog breeds.

Although seldom used today for hunting in Europe and America, where they are popular, Afghan Hounds are frequent participants in lure coursing events and are also popular in the sport of conformation showing. 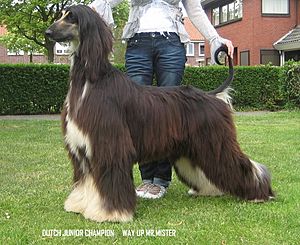 The Khalag Tazi is a variety of the Afghan Hound introduced to Europe in 1920, when an Indian Army officer, Major G Bell-Murray, brought some animals back from Afghanistan. "Tazi" is a current and ancient name for hunting dogs of the sighthound type in the Middle East. It has been used to denote the Saluki, Afghan, Taigan, Persian Greyhound, greyhound types of hound. 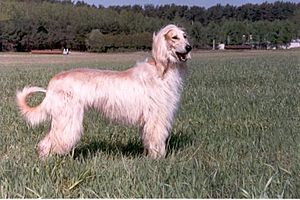 Bakhmull (also Bakhmull Tazi or Tazi Bakhmull, also called the Aboriginal Afghan Hound) is a long-haired variety of sighthound. It has been bred mostly in Russia and claimed to represent an Afghan Hound aboriginal to Afghanistan. In Pashto the word bakhmull means "velvet", applied in reference to the dog's silky coat, which is rather abundant and long on the whole body, except the "saddle" (middle to lower back), front parts of all four legs, and the muzzle. Its color is always fawn, ivory, or white, with a darker "saddle", thus it produces an impression of a (yellowish) dog whose coat color matches the khaki sandstone and limestone of the Hindu Kush mountain landscape and deserts. The following colors are not permissible: red, red with white spots, black, and black with white spots.

Since the 1980s, the centre of Bakhmull breeding has been Russia, beginning in Moscow, then spreading to various other places in the CIS. The foundation stock was brought to Russia in the 1970s by military men returning from Afghanistan. Natalia Gherasiova (a breeder, of the Blue Dale el Bark Bakhmull kennel, and dog show judge) established the National Bakhmull Club, affiliated with the Russian Federation for Hunting Dogs (RFOS) and Russian Kynological Federation (RKF). A breed standard was first published in 1985, and a shared RFOS–RKF revision was produced in 1997.

The Bakhmull is expected to be graceful powerful, with a balanced and symmetrical appearance, and to exhibit predictable and comparatively intelligent behavior, including both calm and gregariousness around people (unless trained as a guard dog), and aggressive hunting in the field. Bakhmulls hunt solo and in couples. Although its coat is long, it does not require much grooming. Paws are well protected from injuries by "feathering" (thick additional paw fur). Its long, velvety coat and its stamina makes more suitable than many breeds for harsh weather. The breed standard calls, rather subjectively, for "aristocratic gait and a beautiful head with gazelle-like ... eyes". The eyes should be large, brown, slanting upwards, and of almond shape, with rims outlined black. Black coloration is a rigid must on the nose and lips for both white and fawn bakhmulls. The dog's height should be between 68–73 centimetres (27–29 in), 65–70 centimetres (26–28 in) for bitches. The height at the withers is 3–4 centimetres (1.2–1.6 in) higher than at the croup. A Bakhmull's gait should be easy and springy. When hunting and searching for prey, a Bakhmull walks or jog-trots. After seeing the game, it immediately starts galloping fast with a whole-body run (a full stretch, contracting to a ball and again to a full stretch like a string with a flexure on the waist). Bakhmull run similarly to a cheetah, but covering long distances, and showing jumping power, speed, and manoeuvring skill.

The Saluki is a breed of the Middle East with ancient origins (though its establishment as a standardised breed was primarily carried out in the United Kingdom and Germany) and is the most closely related to the Afghan Hound out of modern and internationally accepted breeds. The Sloughi, with a name of the same derivation, is primarily of North African stock and is a separate breed.

Because of its distinctive appearance, the Afghan hound has been represented in animated feature films and TV shows, including Universal Pictures' Balto (Sylvie) and Disney's Lady and the Tramp II: Scamp's Adventure (Ruby), an Afghan hound also appeared on 101 Dalmatians as well as in 102 Dalmatians as one of the dogs in Cruella de Vil's party and the television series What-a-Mess (Prince Amir of Kinjan; based on children's books by Frank Muir) and, as Prissy in the 1961 Disney animated film One Hundred and One Dalmatians and 101 Dalmatians II: Patch's London Adventure. Brainy Barker from Krypto the Superdog claims to be an Afghan Hound in the episode "Meet the Dog Stars", although her design actually resembles that of a Saluki instead of an Afghan Hound. Malory Archer in the show Archer had an Afghan hound named Duchess at some point during the childhood of her son, Sterling Archer. The dog is a point of contention between the two, due to Malory's apparent preference for it over her son. In the show Road Rovers, Persia, who is the leader of the Space Rovers, is an Afghan Hound. Burt, an Afghan Hound in the show Foofur antagonizes Foofur to win Dolly's love.

Afghan hounds have also been featured in television advertisements and in fashion magazines. The Afghan hound is represented in books as well, including being featured in a series of mystery novels by Nina Wright (Abra), and a talking Afghan Hound in David Rothman's The Solomon Scandals (2008, Twilight Times Books). In the novel Between the Acts, Virginia Woolf uses an Afghan hound (named Sohrab) to represent aspects of one of the book's human characters.

On August 3, 2005, Korean scientist Hwang Woo-Suk announced that his team of researchers had become the first team to successfully clone a dog, an Afghan Hound named Snuppy. In 2006 Hwang Woo-Suk was dismissed from his university position for fabricating data in his research. Snuppy, nonetheless, was a genuine clone, and thus the first cloned dog in history.

All content from Kiddle encyclopedia articles (including the article images and facts) can be freely used under Attribution-ShareAlike license, unless stated otherwise. Cite this article:
Afghan Hound Facts for Kids. Kiddle Encyclopedia.