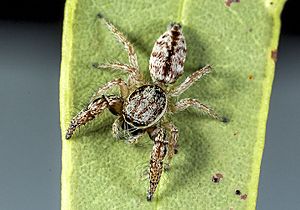 Afraflacilla is a genus of the spider family Salticidae (jumping spiders). Most species are distributed in Eastern to Northern Africa (including the Middle East) and Australia, with one species (A. epiblemoides) found in Europe. This genus was for a time included in the genus Pseudicius, and the boundaries between both genera are disputed. In 2016 Jerzy Prószyński erected the genus Psenuc for some borderline species. The name Afraflacilla is combined from Africa, where most earlier described species were found, and Flacilla Simon, 1901, an obsolete salticid genus now called Flacillula Strand, 1932. This genus name is in turn derived from Aelia Flaccilla, wife of Roman Emperor Theodosius I. Afraflacilla, Pseudicius, Festucula and Marchena are close relatives and form a monophyletic group.

Afraflacilla species have tubercles and bristles (on the sides of the carapace near the eyes and on their legs) which they rub together to make sounds used in courtship and possibly defence. The line of small tubercles (sharp knobs) under the eyes on the side of the carapace are usually visible to the naked eye.

Afraflacilla species in Australia include A. grayorum, A. gunbar, A. huntorum, A. milledgei, A. stridulator, A. vestjensi and A. yeni. In Australia they occupy tree trunks in deserts, savanna woodland and in open sclerophyll forests from south west Western Australia to Cape York Queensland, mostly in warmer regions. There are many undescribed Australian species. Afraflacilla grayorum Grays' stridulating jumping spider, found in northern Australian deserts, was named in honour of Michael and Greta Gray.

The male palpal organ of many Australian Afraflacilla species has a large, circling embolus (inseminating sclerite) and retro-lateral tibial apophysis (side spike). Some undescribed Australian Afraflacilla species have greatly enlarged segments of the first pair of legs, and sometimes massive spurs coming from underneath the tibia and metatarsus (third and second last leg segments). Enlarged leg-one segments are also a feature of Pseudicius, a genus widespread outside Australia. 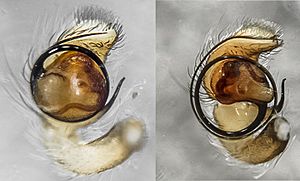 Palpal organs of two species of undescribed Australian Afraflacilla showing the obviously different places on the imaginary clock face at which the embolus arises. These are diagnostic for species, in combination with other characters.

As of November 2017[update], the World Spider Catalog accepted the following species:

All content from Kiddle encyclopedia articles (including the article images and facts) can be freely used under Attribution-ShareAlike license, unless stated otherwise. Cite this article:
Afraflacilla Facts for Kids. Kiddle Encyclopedia.