Africatown, also known as AfricaTown USA and Plateau, is a historic community located three miles (5 km) north of downtown Mobile, Alabama. It was formed by a group of 32 West Africans, who in 1860 were included in the last known illegal shipment of slaves to the United States. The Atlantic slave trade had been banned since 1808, but 110 slaves held by the Kingdom of Dahomey were smuggled into Mobile on the Clotilda, which was burned and scuttled to try to conceal its illicit cargo. More than 30 of these people, believed to be ethnic Yoruba, Ewe, and Fon, founded and created their own community in what became Africatown. They retained their West African customs and language into the 1950s, while their children and some elders also learned English. Cudjo Kazoola Lewis, a founder of Africatown, lived until 1935 and was long thought to be the last survivor of the slaves from the Clotilda.

In 2019, scholar Hannah Durkin from Newcastle University documented Redoshi, a West African woman who was believed at the time to be the last survivor of slaves from the Clotilda. Also known as Sally Smith, she lived to 1937. She had been sold to a planter who lived in Dallas County, Alabama. Redoshi and her family continued to live there after emancipation, working on the same plantation. Durkin later published research indicating that another slave, Matilda McCrear, in fact outlived Smith, dying in 1940.

The population of Africatown has declined markedly from a peak population of 12,000 in the 20th century, when paper mills operated there. In the early 21st century, the community has about 2,000 residents. It is estimated 100 of them are descendants of the people from the Clotilda. Other descendants live across the country. In 2009, the neighborhood was designated as a site on Mobile's African American Heritage Trail. The Africatown Historic District was listed on the National Register of Historic Places in 2012. Its related Old Plateau Cemetery, also known as Africatown Graveyard, was founded in 1876. It has been given a large historical plaque telling its history.

Africatown had its beginnings in an 1860 plan by some wealthy slavemasters and their friends to see if they could evade the law and import slaves from Africa. They bet each other they could elude federal authorities. Timothy Meaher, a shipbuilder and landowner; his brother Byrnes Meaher, John Dabey and others invested money to hire a crew and captain for one of Meaher's ships to go to Africa and bring back laborers for slaves.

They used Timothy Meaher's ship Clotilde under Captain William Foster. It sailed in 1860 from Ghana, West Africa for its final destination of Mobile, more than half a century after the slave trade had been outlawed by the United States in 1808. Over 100 Africans were aboard, having been sold into bondage by the King of Dahomey. Dahomey warriors raided a village near the city of Tamale in Ghana, and took the survivors to Whydah, now Benin, where they were put up for sale. The captured tribesmen were sold for $100 each to William Foster, captain of the Clotilde. 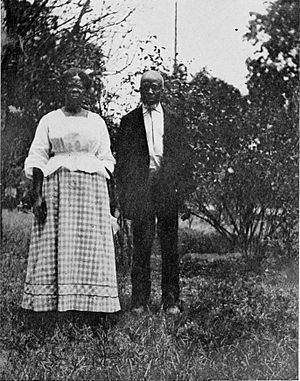 Abaché and Cudjoe Kazoola Lewis at Africatown in the 1910s.

In July 1860, the Clotilde entered Mobile Bay and approached the port of Mobile. Captain Foster loaded the slaves onto a riverboat and sent them ashore; he set fire to the Clotilde to hide the evidence of its captives. The Africans were distributed among the parties who had invested in the venture. Federal authorities learned of this illegal activity and prosecuted Meaher and his partners. The 1861 federal court case of US v. Byrnes Meaher, Timothy Meaher and John Dabey did not find enough evidence to convict Meaher. The case was dismissed. The start of the American Civil War was believed to have been important in the government's dropping the case.

Thirty-two Africans had been taken to Magazine Point, the property owned by Timothy Meaher north of Mobile. As the government was investigating the illegal importation, the Africans were left on their own to survive. This was the site that was developed by them as what became known as Africatown. Among the Africans was a man named Cudjoe Kazoola Lewis, who was the last survivor of the original group, living until 1935.

The group built shelters of whatever they found growing in the Alabama forests, and adapted their hunting to the rich game they found in the area. After the Civil War and emancipation, they were joined by a number of their fellow tribesmen. A man who became known as Charlie Poteet was their chief; their medicine man was named Jabez. In time, they formed a self-governing society. They spoke their native language and carried on their tribal traditions into the 1950s.

Gradually the original group of settlers and their descendants dwindled, as people moved to other areas. Their children went to public schools and learned English. Remaining members would gather on Sundays after church to discuss the group's welfare. Of the remaining people, Cudjoe Lewis was the best known. He gave interviews to the many writers who studied Africatown during the early 20th century. Up until World War II, Africatown survived as a distinct community. 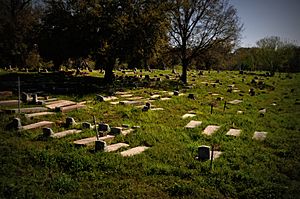 Most of the community now lies within Mobile's northern city limits. In 1997, descendants and friends formed the Africatown Community Mobilization Project to seek recognition of an Africatown Historical District and encourage the restoration and development of the town site.

The site was placed on Mobile's African American Heritage Trail in 2009. The Africatown Historic District was subsequently designated by the National Park Service and listed on the National Register of Historic Places on December 4, 2012. The historic district is encompassed by Jakes Lane, Paper Mill Road, Warren Road (Bay Bridge Road), Chin Street, and Railroad Street.

All content from Kiddle encyclopedia articles (including the article images and facts) can be freely used under Attribution-ShareAlike license, unless stated otherwise. Cite this article:
Africatown Facts for Kids. Kiddle Encyclopedia.