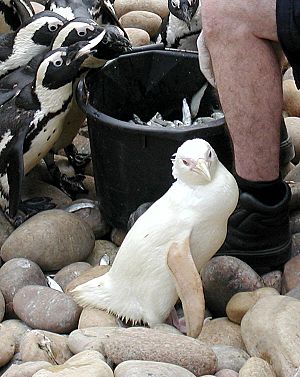 Albinism is a condition some people and animals are born with. This condition is caused by a lack of pigment (colour) in their hair, eyes, and skin. A person or animal with albinism is called an albino. Many albino people prefer to be called a "person with albinism". There are ten different types of albinism.

Vision problems in albinism include nystagmus (irregular fast movements of the eyes), strabismus (where the eyes fail to balance) and refractory errors (like being near-sighted or far-sighted).

In most environments, Albino animals are more easily seen and so may be attacked by predators. They lack the camouflage that the non-albino members of their species have. Also, where colour is a factor in mate selection, they may be at a disadvantage there, too. 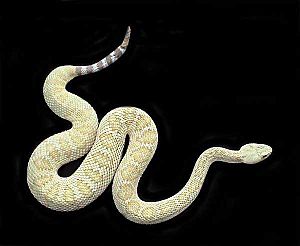 Albinism is a hereditary condition. It is usually inherited in a recessive pattern; it means, both parents have to give the albinism gene to a child to cause albinism. Parents pass on pairs of genes to their children. One of the pairs of genes is in charge of making melanin. If both of these genes are flawed, then little or no pigment is made. If only one gene if flawed then pigment can still be made. 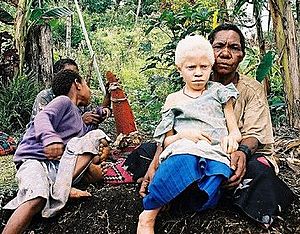 Melanin is an organic pigment that produces most of the colour seen in mammals. Depending on how it is created, melanin comes in two colour ranges, eumelanin (producing dark browns and blacks) and pheomelanin (producing light reddish tans and blondes). The dark and light melanin's have their influence either alone or in conjunction, making either plain or multi-coloured coats.

The production of melanin occurs in melanocytes in a complex process involving the enzyme tyrosinase. Mammals have a gene that codes for the presence of tyrosinase in cells - called the TYR gene. If this gene is altered or damaged, melanin cannot be reliably produced and the mammal will become an albino.

Besides the TYR gene, several other genes can cause albinism. This is because other hormones and proteins are involved in melanin production, the presence of which is genetically determined. In mice, a total of 100 genes are known to affect albinism.

All the genetic traits for albinism are recessive traits. This means that their influence is hidden when paired with stronger traits. For the recessive albino trait to be expressed in a mammal, the offspring must inherit a recessive gene from both parents. 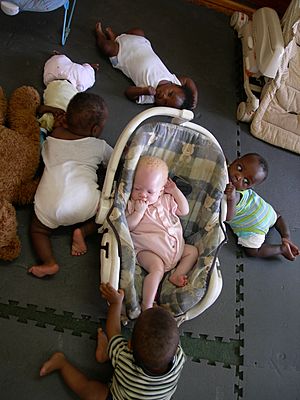 An albino baby girl in an orphanage in Malawi

Albinism in animals is most commonly seen in birds, reptiles and amphibians. It is more rarely seen in mammals and other species.

Some species, such as white peacocks, swans and geese, are not believed to be true albinos, as they do not have red eyes, rather, their colouration is suggested to be the expression of a white fur or feather gene, not a lack of melanin.

The eyes of albino animals appear red because the colour of the red blood cells in the retina can be seen through the iris, which has no pigment to obscure this. Some albino animals may have pale-blue eyes due to other colour generating processes.

Eyes of a person with Albinism

Melanin protects the skin from ultra-violet radiation in sunlight - it blocks harmful electromagnetic radiation from the sun while allowing beneficial frequencies to enter the body. 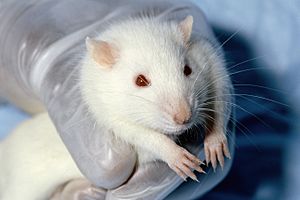 Intentionally bred albinistic strains of some animal species are commonly used as model organisms in biomedical study and experimentation, although some researchers have argued that they are not always the best choice. Examples include the BALB/c mouse and Wistar and Sprague Dawley rat strains and albino laboratory rabbits.

Albino dolphins were first sighted in the Gulf of Mexico in 1962. Since 1994, three further individuals have been seen. These tend to be pink in colour due to blood vessels showing through the blubber and unpigmented skin.

Plants that are pale due to a mutation that eliminates chlorophyll production are sometimes termed albinos, whereas plants that are pale simply from being in the dark are instead termed etiolated. An albino redwood is a rare examples of an albino tree with white needles; despite its lack of chlorophyll it may grow to substantial size as a parasite, usually on the base of the Redwood tree from which it first grew. Only about sixty examples of albino redwoods are known. 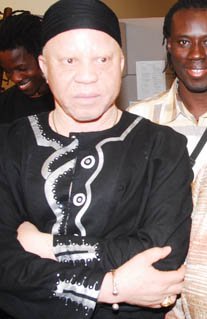 All content from Kiddle encyclopedia articles (including the article images and facts) can be freely used under Attribution-ShareAlike license, unless stated otherwise. Cite this article:
Albinism Facts for Kids. Kiddle Encyclopedia.