All Saints' Church, Kedleston, is a redundant Anglican church standing adjacent to Kedleston Hall, a country house in Derbyshire, England. It is recorded in the National Heritage List for England as a designated Grade I listed building. Kedleston Hall is owned by the National Trust, and the church is under the care of the Churches Conservation Trust. Kedleston Hall has been occupied by the Curzon family for over 700 years.

The settlement of Kedleston was recorded in the Domesday Book, and the first mention of a church here was in 1198–99. The only remaining part of that church is the Norman south doorway and the adjoining wall. The greater part of the present church dates from rebuilding in the 13th century. At some time between 1480 and 1510, the top of the tower was rebuilt in Perpendicular style. Between 1700 and 1720, decorative features, including vases and a sundial, were added to the east face.

In 1759 building of the present hall started. The area occupied by the village of Kedleston was replaced by parkland. In 1884–85 John Oldrid Scott carried out a major restoration. This included raising the level of the roof line, installing a new timber ceiling, adding a new west window in Decorated style, laying a new floor, and removing the box pews from the nave. In 1908, Lord George Curzon added the Kedleston Chapel to the north of the nave over a burial vault. This was a memorial to his wife, Mary, and was designed by G. F. Bodley.

In 1910–12 the stained glass in the windows was replaced and additions were made to it. The church was declared redundant on 1 April 1983, and was vested in the Churches Conservation Trust on 18 April 1989. There are currently two custodians at this site who are in charge of caring and protecting the church during its opening hours.

The church is constructed in sandstone with Welsh slate roofs. Its plan is cruciform, with a central tower over a crossing, a nave with a north chapel (the Kedleston Chapel), north and south transepts, a chancel with a clerestory, and a north vestry. The south doorway is Norman in style, having a round-headed arch decorated with a zigzag pattern, enclosing a tympanum with weathered carvings of beasts. To the right of the doorway are two two-light windows with flat arches. Each transept is buttressed and has a window consisting of three stepped lancets.

Along the parapet is the inscription "QUIA MULTUM AMAVIT". The west wall has diagonal buttresses and a three-light window. Above this is a lancet window in the gable. The tower is in two stages. In the lower stage are two lancet windows, and in the upper stage are two-light bell openings on each side. The summit has a battlemented parapet, with crocketted pinnacles at the corners.

Between the nave and the Kedleston Chapel to its north is a three-bay arcade. There is an aumbry recess and a piscina in the chancel, and another piscina in the south transept. The north transept contains the organ. The font dates from the 18th century and consists of a circular bowl on a polygonal shaft; it has a wooden cover. The wooden pulpit is from the 19th century, and the brass lectern in the shape of an eagle dates from 1886. In the chancel are box pews. The altar is Jacobean in style. In the arcade is a wrought iron screen with gates. The church contains light fittings and a corona lucis, also in wrought iron, and five hatchments.

The stained glass in one of the windows in the chancel dates from the 17th century, and was moved into the church in 1910. The other stained glass dates from the late 19th and early 20th century. The two-manual organ was built in 1899 by W. Hill and Son of London, and rebuilt and enlarged by the same firm in 1910. 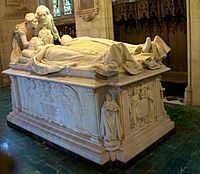 In the church are 35 monuments to the Curzon family; these include free-standing tombs, wall monuments and floor tablets. They date from the 13th to the 20th centuries. The largest is a free-standing tomb in the Kedleston Chapel. It bears the effigies of the 1st Marquess Curzon of Kedleston, who died in 1925, and his wife Mary, for whom the chapel was built and who died in 1906 at the age of 36. It is a table tomb in white marble; two angels holding the crown of life lean over the effigies. The memorial was designed by Sir Bertram Mackennal.

There are more memorials in the north transept. One is designed by Peter Scheemakers to the memory of Sir Nathaniel Curzon, 2nd Baronet, who died in 1719, and his wife Sarah. A further memorial is to Sir Nathaniel Curzon, 4th Baronet and his family dated 1758, made by Michael Rysbrack to a design by Robert Adam.

The churchyard contains the war graves of a Derbyshire Yeomanry officer (a member of the Curzon family), and a Pioneer Corps soldier of World War II.

All content from Kiddle encyclopedia articles (including the article images and facts) can be freely used under Attribution-ShareAlike license, unless stated otherwise. Cite this article:
All Saints Church, Kedleston Facts for Kids. Kiddle Encyclopedia.