Kids Encyclopedia Facts
Not to be confused with Alsagers Bank.

In the centre of Alsager is a lake, Alsager Mere. This isolated pool, once the focal point of the town, is only accessible by two fenced public viewing areas and by local residents who have gardens adjoining the waters.

Alsager has hosted an annual summer carnival since 1998. Until June 2009 the summer carnival was located in Milton Gardens but it has since moved to the Alsager School Playing Fields to increase capacity.

In 2007 Alsager was awarded Fairtrade Town status by the Fairtrade Foundation. 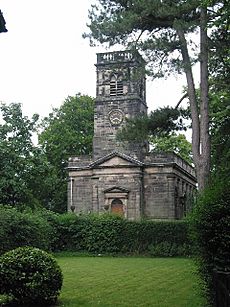 In the neighbouring civil parish and village of Church Lawton are the Church Lawton Barrows, which form part of a significant Bronze Age site near the town.

Alsager was recorded as 'Eleacier' in the Domesday Book, and was a small farming village until the 19th century when, due to its rail connections and rural character, it became a home of choice for pottery works managers from the nearby Federation of Six Towns which later became the city of Stoke-on-Trent.

During the Second World War, a large armaments factory was built outside Alsager at Radway Green, and the town expanded dramatically to house the influx of factory workers. Also during the war a camp was constructed for the training of Royal Marines. This bore the name of "H.M.S. Excalibur" and was situated at the top of Fields Road by the side of the Stoke to Crewe railway line. In 1948 it became a displaced persons camp for refugees from Estonia, Latvia, Lithuania and the former Polish Ukraine, countries which had been forcibly incorporated into the Soviet Union. Many men from these countries had fought on the side of the Germans to try and regain independence, and they were afraid to return to their countries of origin, as many who had returned were executed by the Russians. A school was set up for the education of their children whose only common language when they arrived was German. The school continued to exist for many years in the same set of wooden huts under the name "Excalibur School". The first Roman Catholic church in Alsager was one of the wooden huts and was attended mainly by the Lithuanians, most of whom were Roman Catholic. The Anglican churches are Christ Church (1789), and St. Mary Magdalene (1898).

The Roman Catholic community is served from St Gabriel's Church. The parish is located in the Diocese of Shrewsbury (Central Cheshire Region – Local Pastoral Area 9).

The artist James Lloyd was born in the town.

The town is home to Alsager Community Theatre (ACT), an amateur drama group founded in 1973. ACT puts on its productions at Alsager Civic and at nearby Little Moreton Hall.

Formerly housed on Manchester Metropolitan University's Alsager campus, Alsager Arts Centre had a public programme of touring new performance and visual art work presented in two intensive seasons – September to November and January to March. The centre has now moved to the university's Crewe campus, as its Alsager site has closed.

Alsager is close to junction 16 of the M6 motorway, and is served by Alsager railway station on the Crewe to Derby Line and the semi-fast Crewe to Euston Line, both services operating hourly during the working day. Buses (the number 3) run to Crewe and Hanley every 20 minutes. The 78 bus service links Alsager with Sandbach, Nantwich, Leighton Hospital and Rode Heath once an hour, and service 315 with Congleton and Rode Heath about three times a day.

The Trent and Mersey Canal runs just to the north-east to the town, forming part of the Cheshire Ring Canal Walk and the South Cheshire Way footpath. The canal's towpath and the nearby 'Salt Line' are also routes of the National Cycle Network.

Alsager has several parks. The town's main park is Milton Garden, which has an ornamental sunken garden, a skatepark, a small children's football pitch and a play area.

There is a strong tradition of allotment holding in the town, administered by the Alsager Gardens Association.

All content from Kiddle encyclopedia articles (including the article images and facts) can be freely used under Attribution-ShareAlike license, unless stated otherwise. Cite this article:
Alsager Facts for Kids. Kiddle Encyclopedia.