Alton Baker Park is located in Eugene, Oregon, United States, near Autzen Stadium. It was named for Alton F. Baker, Sr., the eleventh owner (60 years after it was founded) of Eugene's The Guard newspaper (later The Register-Guard). It features duck ponds, bicycle trails, a dog park and a disc golf course, and directly touches the Ferry Street Bridge across the Willamette River.

Other amenities include the Cuthbert Amphitheater, a venue for outdoor musical and drama performances. The amphitheater is named for Fred Cuthbert, the park's designer. 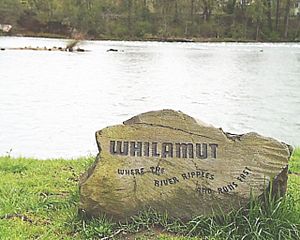 One of the boulders engraved with Kalapuyan words along the paths of east Alton Baker Park, this one is next to the Willamette River: "Whilamut" "Where the river ripples and runs fast"

The less developed, eastern part of Alton Baker Park is known as the Wilhamut Natural Area and links to Springfield's Eastgate Woodlands via bicycle paths and open space. "Wilhamut" is a Kalapuya word that means "where the river ripples and runs fast". A ceremony to rename the former East Alton Baker Park took place on September 7, 2002 and included a traditional Kalapuya naming ceremony.

The prize recipients honored in the park are

All content from Kiddle encyclopedia articles (including the article images and facts) can be freely used under Attribution-ShareAlike license, unless stated otherwise. Cite this article:
Alton Baker Park Facts for Kids. Kiddle Encyclopedia.