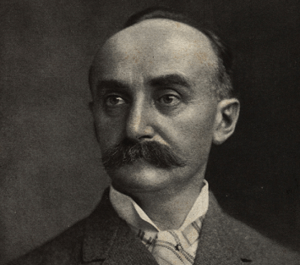 He is mostly known for the part he took into the Peary expedition to Greenland of 1891–1892 and for his observations and photographs of the 1902 eruption of Montagne Pelée in Martinique.

He also was a mountaineer and a painter.

Angelo Heilprin was born at Sátoraljaújhely, in the Zemplén County of the Kingdom of Hungary. His family was Jewish. He arrived in the United States from the Austrian Empire with his father Michael and his brother Louis in 1856.

He went back to Europe in 1876 for two years to complete his education. He studied at the Royal School of Mines, London, at the Imperial Geological Institution of Vienna, and at Florence (where he had his only formal training in painting) and Geneva; he also went to Hungary, where he mountaineered in the Carpathians, and to Poland where he visited family for six months.

Also a painter, Heilprin exhibited Autumn's First Whisper at the Pennsylvania Academy of the Fine Arts in 1880, and Forest Exiles at the Boston Museum of Fine Arts in 1883.

In 1902 he founded the American Alpine Club. 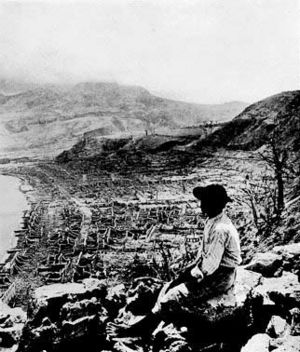 One of Heilprin's most famous photographs: the ruined city of Saint-Pierre, with the Montagne Pelée volcano lost in cloud in the background

In Heilprin's life research travels alternate with periods of teaching and writing. He visited Florida, the Bermudas, Mexico, Greenland and Martinique while also devoting work to his more immediate surroundings. His mountaineering skills were put to use many times in his scientific work.

In 1886, Heilprin undertook an expedition to the then little-known west coast of Florida.
In 1887 he went to the Bermudas with members of his classes to study coral reefs, confirming Charles Darwin's 1842 views expressed in The structure and distribution of coral reefs.
In 1888, Heilprin was in Mexico, where he ascended volcanos: Ixtaccihuatl, Nevado de Toluca, Pico de Orizaba and Popocatepetl, establishing their altitudes with barometric measures. He also shed light on questions about the geology of the Yucatan and the coral reefs of the western Gulf of Mexico.

En 1891 Heilprin embarked with Robert Peary on an expedition to Greenland organized by the Academy of Natural Sciences. Peary was the leader of the north-bound expedition, which was to prove that Greenland is an island. Heilprin headed the "Western Expedition" comprising half a dozen scientists. The scientists collected data then returned to the U.S., while Peary remained in Greenland. But the next year Heilprin was back to Greenland, leading the "Peary relief expedition".

In 1902, when Montagne Pelée in Martinique erupted, reducing the city of Saint-Pierre to ashes, Heilprin was one of the first scientists to arrive to the site. His works, photographs and eyewitness account of the phenomena and their consequences are unique. He was the first geologist to ascend a side of the crater. He revisited it in 1903 and in February 1906 descended into the crater itself.

Articles for the general public

All content from Kiddle encyclopedia articles (including the article images and facts) can be freely used under Attribution-ShareAlike license, unless stated otherwise. Cite this article:
Angelo Heilprin Facts for Kids. Kiddle Encyclopedia.