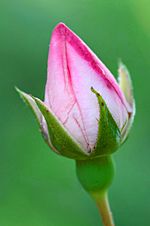 Bud of a pink rose

Angiosperms have a number of derived characters, which evolved as they split off from the gymnosperms.

Flowers, the reproductive organs of flowering plants, are the most remarkable feature distinguishing them from other seed plants. Flowers, with their colour and their nectar, act to attract pollinators, which are mostly insects and birds. Whereas gymnosperms are almost entirely wind-pollinated, early flowers were probably all insect-pollinated. Some present-day flowering plants are wind-pollinated, but that is a secondary feature.p182

The fertilized angiosperm ovule develops into a seed, and the ovary develops into the fruit. The fruit is often a way to use animals to spread the seeds far and wide. The fruit is made out of the carpel and some tissue round it. The carpel hold inside itself the ovules.

In general, endosperms form after fertilization and before the first division of the zygote. Endosperm is a highly nutritive tissue that can provide food for the developing embryo, the cotyledons, and sometimes the seedling when it first appears.

Specialised sexual parts have led to co-evolution in fertilization and seed dispersal. The stamens, and the male and female gametophytes, have been adapted in many ways to suit particular pollinators. The smaller pollen grain shortens the time between pollination and fertilization, which can be up to a year in gymnosperms. The small female gametophyte also allows rapid seed production, which led to annual herbaceous life-cycles.

Adaptations in these novelties allowed angiosperms to invade many habitats. They now dominate everywhere except the boreal forest or taiga, which is still composed almost entirely of gymnosperms.

A whole genome duplication (doubling) at 160 million years ago (mya) may have started the ancestral line that led to all modern flowering plants. That event was studied by sequencing the genome of an ancient flowering plant, Amborella trichopoda. Amborella, found on the Pacific island of New Caledonia, belongs to a sister group of the other flowering plants. Studies suggest that it has features that may have been characteristic of the earliest flowering plants.

The earliest known fossil confidently identified as an angiosperm, Archaefructus liaoningensis, is dated to about 125 mya in the Lower Cretaceous. Pollen probably of angiosperm origin takes the fossil record back to about 130 mya.

The phylogeny of Angiosperms is as follows:

All content from Kiddle encyclopedia articles (including the article images and facts) can be freely used under Attribution-ShareAlike license, unless stated otherwise. Cite this article:
Flowering plant Facts for Kids. Kiddle Encyclopedia.