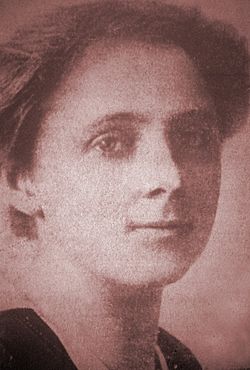 Anna Louise Strong at the time of her recall from the Seattle School Board in 1918.

Anna Louise Strong (November 24, 1885 – March 29, 1970) was an American journalist and activist who reported on communist movements in the Soviet Union and the People's Republic of China. She also supported these movements.

Strong was born on November 24, 1885 in Friend, Nebraska. Her father, Sydney Dix Strong, was a minister in the Congregational Church and was a missionary. She was a very smart child and went through school very fast. She then went to Europe to study other languages.

She first attended Pennsylvania's Bryn Mawr College from 1903 to 1904, then graduated from Oberlin College in Ohio, where she later returned to speak many times. In 1908, at the age of 23, she finished her education and received a Ph.D. in philosophy from the University of Chicago with a thesis later published as The Social Psychology of Prayer. She supported child welfare, and traveled around speaking about it. When she came toSeattle to speak about it in May 1914, more than 6,000 people came per day. At least 40,000 people came on her last day in Seattle.

Strong was 30 years old when she returned to Seattle to live with her father, then pastor of Queen Anne Congregational Church. She liked the progressive politics that were popular there, which supported organized labor.

When Strong ran for the Seattle School Board in 1916, she won easily because she was helped by women's groups and organized labor and because she was known as an expert on child welfare. She was the only female board member. She argued that the public schools should offer social service programs for poor children and that these programs should be community centers. But there was little she could do: Other members chose to devote meetings to things that Strong felt were less important, such as plumbing in the schools.

In the year of her election, 1916, the Everett Massacre happened . Strong was hired as a stringer by the New York Evening Post to report on the bloody conflict between the IWW (or "Wobblies") and the army of armed guards hired by Everett mill owners to keep them out of town. At first, she was just somebody who was watching without taking a side. However, she soon started taking the side of workers' rights and speaking about this belief.

Strong's endorsement of left-wing causes made her different from the other people on the school board. She was against war, and when the United States entered World War I in 1917, she spoke out against the draft. On one hand, the PTA and women's clubs joined her in opposing military training in the schools. On the other hand, the Seattle Minute Men, many of whom were veterans of the Spanish-American War, said that she was unpatriotic.

The anti-war beliefs of the Wobblies led to many of them being arrested at the Seattle office where Louise Olivereau, a typist, was mailing things to draftees that told them to think about becoming conscientious objectors and not enter the draft. In 1918, Strong stood by Olivereau's side in the courtroom, as the typist-activist was tried for sedition, found guilty, and sent to prison.

Strong's fellow school board members started recall campaign to get Strong removed from the school board, and they won. She showed up at their next meeting to argue that they should choose a woman to replace her. The school board decided to do this, but they said that they wanted a mainstream, patriotic representative, and a mother with children in the schools. They replaced Anna Louise Strong with Evangeline C. Harper, a well known country club woman.

Strong because known as part of the city's labor-owned daily newspaper, The Union Record, writing forceful pro-labor articles and saying good things about the new Soviet government. On February 6, 1919, two days before the beginning of the Seattle General Strike of 1919, she wrote in an editorial: "We are undertaking the most tremendous move ever made by labor in this country, a move which will lead — NO ONE KNOWS WHERE!" The strike shut down the city for four days and then ended as it had begun — peacefully and with its goals still unclear.

Not knowing what to do, she took her friend Lincoln Steffens' advice and in 1921 travelled to Poland and Russia serving as a correspondent for the American Friends Service Committee. The reason she was going was to give the first foreign relief to the Volga famine victims. After a year of that, she was named Moscow correspondent for the International News Service. Strong saw many things in Europe which inspired her to write. Some of her works include The First Time in History (preface by Leon Trotsky) (1924), and Children of Revolution (1925). After remaining in the area for several years, Strong grew to become an supporter of socialism in the newly formed Soviet Union. In 1925, during the era of the New Economic Policy in the USSR, she came back to the United States to make businessmen interested in investing in industry and development in the Soviet Union. During this time Strong, also gave many speeches and became well known as an authority on "soft news" (such as how to get an apartment) about the USSR.

In the late 1920s, Strong travelled in China and other parts of Asia. She became friends with Soong Ching-ling and Zhou Enlai. She wrote some more books about her travels, including China's Millions (1928), Red Star in Samarkand (1929).

In 1930 she came back to Moscow and helped start Moscow News, the first English-language newspaper in the city. She was managing editor for a year and then became a featured writer. She married Soviet official and fellow socialist Joel Shubin in 1932. Much like Strong, Shubin was a man passionately dedicated to his work and the two were often apart because of work, and would ultimately spend little time together before Shubin's death in 1942.

While living in the Soviet Union, she became more happy with the Soviet government and wrote many books praising it. They include: The Soviets Conquer Wheat (1931), an updated version of China's Millions: The Revolutionary Struggles from 1927 to 1935 (1935), the best-selling autobiographical I Change Worlds: the Remaking of an American (1935), This Soviet World (1936), and The Soviet Constitution (1937).

In 1936 she returned once again to the United States. Quietly and privately upset with news in the USSR (The "Great Purges"), she continued to write for leading periodicals, including The Atlantic Monthly, Harper's, The Nation and Asia. A visit to Spain resulted in Spain in Arms (1937); visits to China led to One Fifth of Mankind (1938). In 1940 she published My Native Land. Other books include The Soviets Expected It (1941); the novel Wild River (1943), set in Russia; Peoples of the U.S.S.R. (1944), I Saw the New Poland (1946) (based on her reporting from Poland as she accompanied the occupying Red Army); and three books on the success of the early Communist Party of China in the Chinese Civil War.

While in the USSR she travelled throughout the huge nation, including the Ukraine, Kuznetsk, Stalingrad, Kiev, Siberia, Central Asia, Uzbekistan, and many more. She also travelled into Poland, Germany, and Britain. While in the Soviet Union, Strong met with Stalin, Molotov, and many other Soviet officials. She interviewed factory workers, farmers, and pedestrians.

In World War II, when the Red Army began its advance against Nazi Germany, Strong stayed in the rear following the soldiers through Warsaw, Łódź and Gdańsk. In great part because of her overtly pro-Chinese Communist sympathies she was arrested in Moscow in 1949 and charged by the Soviets with espionage. She later returned to the USSR in 1959, but settled in China until her death.

Strong met W. E. B. Du Bois, who visited Communist China during the Great Leap Forward in the late 1950s. Neither ever supported famine-related criticisms of the Great Leap. Strong wrote a book titled When Serfs Stood Up in Tibet based on her experience during this period, which include the Chinese invasion of Tibet.

Partly from fear of losing her passport if she came back to the USA, she moved to China until her death in 1970, publishing a "Letter from China." During that time, she got to know Zhou Enlai very well, and also knew Mao Zedong. She lived in the old Italian Legation which had been changed into flats for the leading "foreign friends".

All content from Kiddle encyclopedia articles (including the article images and facts) can be freely used under Attribution-ShareAlike license, unless stated otherwise. Cite this article:
Anna Louise Strong Facts for Kids. Kiddle Encyclopedia.