Annerley is a suburb in the City of Brisbane, Queensland, Australia. In the 2016 census, Annerley had a population of 11,336 people.

Annerley is located 6.2 kilometres (3.9 mi) by road south of the Brisbane GPO. 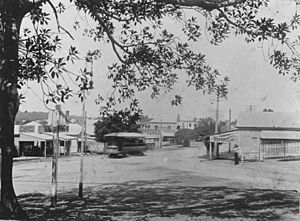 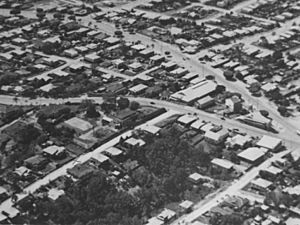 Much of the suburb is elevated, lying on a ridge that gives views of the city. For many years it was a somewhat rundown suburb, particularly close to main roads and with a lot of social housing, but with gentrification and the rise in the cost of housing, many of the original 'Queenslanders' have been restored to their former glory, giving the suburb an eclectic mix of residences for all socio-economic levels.

The suburb is of medium population density with many apartment blocks, guest houses and fast-food outlets. The major road in the suburb is Ipswich Road, one of Brisbane's main southerly traffic arteries. Until 13 April 1969 the suburb was served by electric trams, which ran along Ipswich Road.

Around 1880 a postal receiving office was opened at Boggo, which became Boggo Post Office on 1 May 1882. There was a proposal to rename it Richmond Post Office but this was rejected owing to the potential for confusion with Richmond, North Queensland and Richmond, New South Wales and new alternative names were sought. At this point it is believed that Digby Denham, then a member of the Stephens Divisional Board (and later a Premier of Queensland), proposed to call it Annerey after the township variously spelled Annerley, Annerly or Anerly in Surrey, England. The post office was renamed Annerley Post Office in November 1892.

Saint Philips Anglican church was dedicated 18th. October, 1886. Extensively damaged by a cyclone, 6 December 1905. It was rebuilt, extended and re-dedicated on 1 April 1906 by St. Clair Donaldson Archbishop of Brisbane, H.W. Atkinson Architect. The old church was destroyed by fire 28th Nov 1954 after work on the new church had begun. The current church was consecrated by the Archbishop of Brisbane, 1 December 1955.

There were at least two parishioners that lost their lives at Gallipoli. "At St Philips we know of only two of our parishioners who were part of this landing at Gallipoli who later died on 8th April 1918 in France. The two were good mates and brother and brother in law. They died on the same day in the same battle recorded by the historian Charles Bean. ....Reginald Verry and his brother in law James Victor Atkinson."

A state funeral was held at the church for Gordon Brown [Australian politician] who was a SENATOR FOR QUEENSLAND, 1932–65 (AUSTRALIAN LABOR PARTY) and his ashes are kept in the church's columbarium.

Thompson Estate Provisional School opened on 30 April 1888 in a four-roomed cottage in Oxford Street with 52 pupils. In 1889 the school occupied a hall in Regent Street to cater for the growing number of students. It became a state school on 31 Jan 1891 under head teacher James Joseph Dempsey with an average attendance of 461 pupils. It relocated to its present site in Waldheim Street on 31 March 1891. It was renamed Junction Park State School in 1893 with 737 pupils (the current site no longer being within Thompson Estate). Growing student numbers resulted in the creation of a separate but adjacent Junction State Infants School which opened on 1 July 1948 for Grade 1 and 2 pupils. From 1 January 1875, the infants school was reabsorbed into the main school, but the separate grounds and buildings continued to be used for the younger pupils within Junction Park State School. Later declining enrolment numbers lead to the infants school buildings being surplus to the school's needs and the land was sold for residential housing.

The Ipswich Road Convent School was opened on 30 April 1917 by the Society of the Sacred Heart (a teaching order of Roman Catholic nuns) using the church building as the classroom. In 1919, the Sisters of the Sacred Heart relocated to Stuartholme and the Sisters of St Joseph of the Sacred Heart (founded by Saint Mary MacKillop) took over the school, renaming it St Joseph's Convent School. When the present church was built in 1932 on the corner of Ipswich Road and Ferndale Street (adjacent to the former church), separate class rooms were included on a lower level. In the 1950s the school was renamed Mary Immaculate Catholic Primary School to reflect the name of the church with which it was associated. Since 1954, further buildings have been added to the site specifically for use by the school, including the Marymac Community Centre in the 1970s. The school was operated by the Sisters of St Joseph until 1991, after which the school was operated by the Archdiocese of Brisbane Catholic Education Council (commonly known as Brisbane Catholic Education).

In 1964 the Sisters of St Joseph also opened a secondary school for girls called Our Lady's College. Since 1976, the school has been operated by Brisbane Catholic Education. 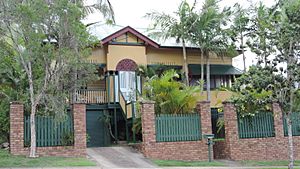 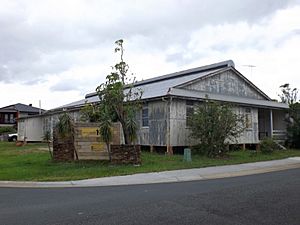 There are a number of heritage-listed sites in Annerley, including:

In addition there are many period homes, which, although not heritage-listed, contribute to the aesthetics of the suburb, including: 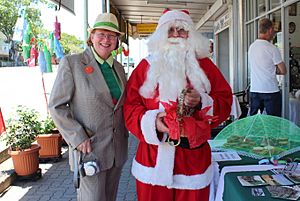 All content from Kiddle encyclopedia articles (including the article images and facts) can be freely used under Attribution-ShareAlike license, unless stated otherwise. Cite this article:
Annerley, Queensland Facts for Kids. Kiddle Encyclopedia.