Kids Encyclopedia Facts
This page is about the butterfly species. For other uses, see Arctic blue (disambiguation).

Agriades glandon, the Arctic blue or Glandon blue, is a species of butterfly in the family Lycaenidae. It in found in Eurasia and North America.

In North America, this species is found from Alaska east to Newfoundland, south through the mountains to Washington, northern Arizona, and northern New Mexico. In Europe, it is found in mountainous areas like the Pyrenees and Alps, as well as the far north. It is also found in parts of Russia, including Siberia, and Kamchatka. 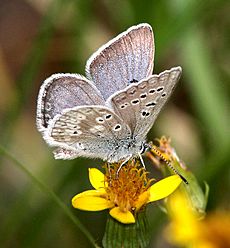 The wingspan is 17–26 mm. The male wing uppersides are silver-coloured, steely blue or pale shining blue and become increasingly brown towards the edges. The female wing uppersides are almost entirely brown but with a slightly bluish pollination in the basal region. The incidence of darkening increases with altitude. All wings usually have small, dark disk spots that are sometimes surrounded by white. Both sexes have white-rimmed black dots on the pale grey-brown ground of the forewing underside, while the underside of the hind wings reveals striking white spots and occasionally orange-colored dots on the greyish-brown ground.

Despite a large geographic variability in the pattern of the wing, the species is, in Europe, clearly distinguishable from other bluish species in a complex of three species widely separated geographically. Only two species overlap in range in Europe that could be confused. In the Alps and the Pyrenees, the more local and less frequent, Aricia nicias, has fine underside markings and a white stripe. In the Pyrenees, Agriades pyrenaicus may also fly in the same locations. In this species the underside forewing submarginal spots are bold black not faint grey-brown and the black markings on the underside hindwing are relatively greatly reduced or absent. Other similar species do not overlap in distribution. They are Agriades zullichi (Spain) and Agriades aquilo (Arctic Europe), and are sometimes viewed as subspecies of Agriades glandon.

The butterfly flies from mid-May to September depending on the location.

Several subspecies have been described:

The relationships between these taxa are not yet fully understood. Many authors treat A. g. aquilo as a separate species. Some authors also consider all the above North American subspecies to belong to one separate species, which they call Agriades franklinii. Subspecies rustica and cassiope are sometimes also treated as valid species.

All content from Kiddle encyclopedia articles (including the article images and facts) can be freely used under Attribution-ShareAlike license, unless stated otherwise. Cite this article:
Arctic blue Facts for Kids. Kiddle Encyclopedia.