Arts in Atlanta facts for kids 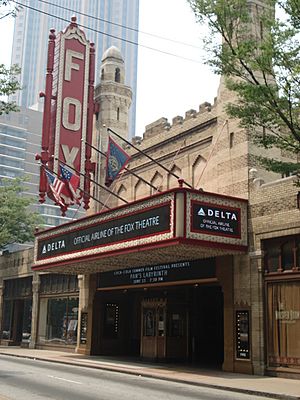 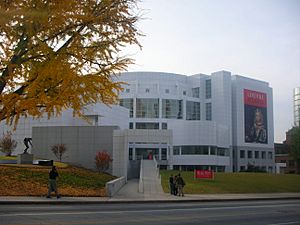 The arts in Atlanta are well-represented, with a particularly prominent presence in music, fine art, and theater.

Atlanta has played a major or contributing role in the development of various genres of American music at different points in the city's history. Beginning as early as the 1920s, Atlanta emerged as a center for country music, which was brought to the city by migrants from Appalachia. During the countercultural 1960s, Atlanta hosted the Atlanta International Pop Festival, with the 1969 festival taking place more than a month before Woodstock and featuring many of the same bands. The city was also a center for Southern rock during its 1970s heyday: the Allman Brothers Band's hit instrumental "Hot 'Lanta" is an ode to the city, while Lynyrd Skynyrd's famous live rendition of "Free Bird" was recorded at the Fox Theatre in 1976, with lead singer Ronnie Van Zant directing the band to "play it pretty for Atlanta." During the 1980s, Atlanta had an active Punk rock scene that was centered on two of the city’s music venues, 688 Club and the Metroplex, and Atlanta famously played host to the Sex Pistols first U.S. show, which was performed at the Great Southeastern Music Hall. The 1990s saw the birth of Atlanta hip hop, a subgenre that gained relevance following the success of home-grown duo OutKast; however, it was not until the 2000s that Atlanta moved "from the margins to becoming hip-hop’s center of gravity, part of a larger shift in hip-hop innovation to the South." Also in the 2000s, Atlanta was recognized by the Brooklyn-based Vice magazine for its impressive yet under-appreciated Indie rock scene, which revolves around the EARL in East Atlanta Village.

Atlanta hip hop Atlanta has been called "hip-hop's center of gravity," and the city is considered is a capital of hip hop, including Southern hip hop, of R&B and of neo soul. The city is the current home or birthplace of many hip-hop artists including Lil Jon, Ludacris, B.o.B and Usher. It is also a center of gospel music where the Gospel Music Association Dove Awards take place. 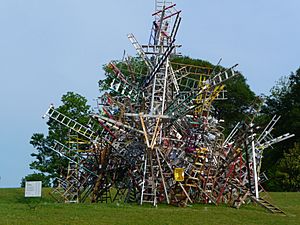 Rise Up Atlanta, by Charlie Brouwer, was a temporary urban-art sculpture made of ladders erected in the East Side's Freedom Park

Atlanta is home to a growing, established visual arts community. In 2010, the city was ranked as the ninth-best city for the arts by American Style Magazine. Most of the city's art galleries are located in the Castleberry Hill and West Midtown neighborhoods. While every type of visual art is represented in the city, Atlanta is a major center for contemporary art, public art, and urban art. The growing Atlanta campus of Savannah College of Art and Design has brought in a steady stream of artists and curators.

In 2010, American Style Magazine ranked Atlanta as the ninth-best city for the arts. The renowned High Museum of Art is arguably the South's leading art museum and among the 100 most-visited art museums in the world. Other art institutions include the Museum of Design Atlanta (MODA), the Atlanta Contemporary Art Center, the Museum of Contemporary Art of Georgia, and the Michael C. Carlos Museum at Emory, containing the largest collection of ancient art in the Southeast. 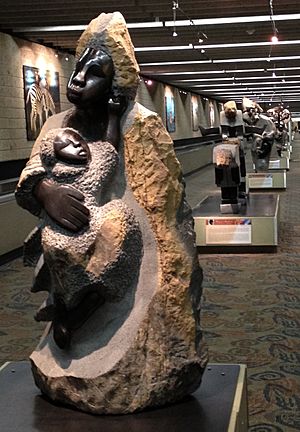 Zimbabwe sculpture: a tradition in stone at Atlanta airport between courses T and A

The city's Office of Cultural Affairs administers a public art program, which include works such as Atlanta from the Ashes (The Phoenix), and Thornton Dial's The Bridge at John Lewis plaza in Freedom Park. The office also sponsors temporary exhibitions of art in public spaces such as "Elevate" in 2011. The Metropolitan Public Art Coalition also promotes public art in the city and stages occasional exhibitions.

The city's Aviation Arts program administers and art program at Atlanta's airport, including Zimbabwe Sculpture: a Tradition in Stone and the Deborah Whitehouse mural Spirit of Atlanta, which welcomes passengers as they arrive at baggage claim from the peoplemover.

The 22 miles (35 km) BeltLine corridor, a former rail corridor gradually being developed into an improved biking and walking trail, is home to the annual Art on the BeltLine exhibition. In 2011 66 visual and performance pieces were exhibited.

Although historically never a haven for street art like New York City or Los Angeles, street art is becoming more prominent in Atlanta. The Krog Street Tunnel in Cabbagetown is the city's best-known street art canvas, with much new street art also being created along the 22-mile BeltLine trail. In 2011 the city hosted the Living Walls street art conference and will co-host it with Albany, New York in 2012.

In May 2011 Atlanta established a Graffiti Task Force. Though in October 2011 the police arrested 7 persons designated as vandals, city officials assert that they have no intention of stifling the street art scene. The city's Office of Cultural Affairs selected 29 standout murals to avoid whitewashing including murals commissioned as part of the BeltLine, works created during the Living Walls conferences, but not the most famous street art space in the city, the Krog Street Tunnel. Many street artists and members of the arts community interviewed by Creative Loafing believe the city's efforts are misdirected or futile.

Arts centers in Atlanta include King Plow Arts Center and the Goat Farm Arts Center in West Midtown, The Metropolitan in Adair Park and Studioplex in the Old Fourth Ward neighborhood.

There are small concentrations of galleries in the intown neighborhoods, including but not limited to Castleberry Hill, Buckhead, the Westside Arts District in West Midtown, at Studioplex in Old Fourth Ward, and along Ponce de Leon Avenue in Poncey-Highland. Each of those areas sponsors an art walk, usually monthly.

Atlanta is one of few United States cities with permanent, professional, resident companies in all major performing arts disciplines: opera (Atlanta Opera), ballet (Atlanta Ballet), music (Atlanta Symphony Orchestra), and theater (the Alliance Theatre). Atlanta also attracts many touring Broadway acts, concerts, shows, and exhibitions catering to a variety of interests. Atlanta’s performing arts district is concentrated in Midtown Atlanta at the Woodruff Arts Center, which is home to the Atlanta Symphony Orchestra and the Alliance Theatre. The city also frequently hosts touring Broadway acts, especially at The Fox Theatre, a historic landmark that is among the highest grossing theatres in of its size. 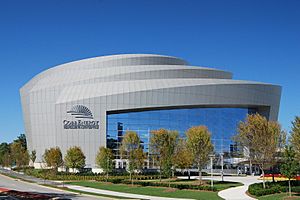 In the city of Atlanta:

In Metro Atlanta, the Cobb Energy Performing Arts Centre and Gwinnett Center's performing arts center are prominent venues. Regional centers featuring a mix of the arts include the Elm Street Cultural Arts Village in Woodstock and the Jaqueline Casey Hudgens Center for the Arts (adjacent to Gwinnett Center) in Duluth.

Atlanta is the home of many influential writers of the 20th century, including Margaret Mitchell, author of Gone With the Wind, one of the best-selling books of all time; Alice Walker, author of Pulitzer Prize-winning and critically acclaimed novel The Color Purple; Alfred Uhry, playwright of Driving Miss Daisy, which deals with Jewish residents of Atlanta in the early 20th century; and Joel Chandler Harris, author of the Brer Rabbit children's stories. Famous journalists include Ralph McGill, the anti-segregationist editor and publisher of the Atlanta Constitution newspaper. Atlanta is also the home of contemporary editorial cartoonist Mike Luckovich, who is syndicated nationally to 150 newspapers.

All content from Kiddle encyclopedia articles (including the article images and facts) can be freely used under Attribution-ShareAlike license, unless stated otherwise. Cite this article:
Arts in Atlanta Facts for Kids. Kiddle Encyclopedia.