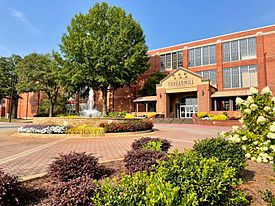 Austell is a city in Cobb and Douglas Counties in the U.S. state of Georgia. It is part of the Atlanta metropolitan area. As of the 2020 census, the city had a population of 7,713.

The area that is now Austell was frequented by game hunters and trappers on their way to the area's salt licks. These early visitors claimed the area's waters had medicinal properties. It soon became a destination for therapeutic healing, leading to the founding of a town known as Salt Springs. As immigration increased and demand for land near the spring grew, G. O. Mozely donated and subdivided 40 acres (16 ha) of his land, enhancing the loose settlement with a street plan. Later, the spring was renamed Lithia Springs due to the water containing lithium carbonate, and the neighboring city of Lithia Springs was founded in 1882. In 1888, the lithia spring water was bottled and sold under the commercial name Bowden Lithia Spring Water. The historic lithia spring water is still bottled and sold under the name brand Lithia at fine restaurants and health food stores. Georgia Pacific, now a division of Southern Railway, chose the town of Austell to be a station depot, being the dividing point for the major Birmingham and Chattanooga railway lines.

The town of Austell is named for General Alfred Austell (1814–1881), founder of the Atlanta National Bank (later Wachovia), in recognition of his efforts to bring major railways to the South. Austell is buried in an elaborate Gothic Revival-style mausoleum at the highest point in Atlanta's Oakland Cemetery.

In 2009, Sweetwater Creek flooded, destroying many homes and businesses in the Austell area.

Sweetwater Creek, a tributary of the Chattahoochee River, flows through the city, passing north, then east of the city center. The area is relatively flat, with few large hills.

According to the Köppen classification, Austell has a humid subtropical climate with hot, humid summers and mild, but occasionally cold winters by the standards of the southern United States. The city experiences four distinct seasons. Summers are hot and humid, with a July daily average of 89 °F (32 °C). In a normal summer it is not unusual for temperatures to exceed 90 °F (32 °C). Winters are mild, windy, with some warm, sunny days and occasional snow, with a January average high of 50 °F (10 °C) and low of 30 °F (−1 °C). Occasionally, high temperatures will struggle to reach 40 °F (4 °C), and nights can dip into the teens. Subzero temperatures are very uncommon and only occur every decade or so.

Six Flags Over Georgia, a large tourist attraction, is located in unincorporated Cobb County 7 miles (11 km) southeast of downtown and has an Austell mailing address.

The Collar Community Center located near downtown is used for civic organizations and local get-togethers. South Cobb Recreation Center is a 21,000-square-foot (2,000 m2) facility that offers a gym, two multipurpose rooms, a caterer's kitchen, six offices, a conference room, three restrooms and a lobby. It has an occupational capacity of 939.

The Austell Parks and Recreation Department maintains five recreational facilities and seven parks Berry Park, a passive park, Collar Park and Legion Park which are both community parks, and Pine Street, Stephens, Washington Street and Berry Park which are neighborhood parks. Combined, they all cover an area of 36.2 acres (14.6 ha).

Austell is 4 miles (6 km) north of Interstate 20. It also sits on the divergence of two Norfolk Southern rail lines, one to Birmingham and the other to Chattanooga.

The economy of Austell in its early years was largely tied to the rail depot, transferring people and goods and allowing many residents to commute to nearby Atlanta in pursuit of higher paying, more abundant jobs. Passengers no longer move by rail to or from Austell, though. Other industry includes recycling paper and plastics with exports going as far as China.

During summer, softball games are nearly a continual occurrence with city leagues having 30 games and 450 players. In addition to cheerleading, 32 teams of over 500 youths are sponsored by the Sweetwater Valley Youth Association. Five lighted fields accommodate baseball and softball aficionados. Collar Park and Washington Street Park both have tennis courts.

Private schools in the city include:

All content from Kiddle encyclopedia articles (including the article images and facts) can be freely used under Attribution-ShareAlike license, unless stated otherwise. Cite this article:
Austell, Georgia Facts for Kids. Kiddle Encyclopedia.