Powder Springs is a city in Cobb County, Georgia, United States. The population was 13,940 at the 2010 census, with an estimated population for 2019 of 15,758. In 2015, the city elected its first black mayor, Al Thurman. He was the first African-American to be elected as a mayor in Cobb County, but was one of several elected in small towns in Georgia in 2015. The 12,000-capacity Walter H. Cantrell Stadium is located in Powder Springs. It is used mostly for football and soccer matches.

The town of Powder Springs was incorporated as Springville in 1838 in the lands of two Cherokee Indian leaders. Gold had been discovered in Georgia ten years earlier, and the first European-American settlers came to find gold. The settlers found little gold in the mines at Lost Mountain and off Brownsville Road. It was at about this time that the Cherokee people were forced off their land and removed to Indian Territory west of the Mississippi River on the Trail of Tears.

Springville was renamed as Powder Springs in 1859. The name was derived from the seven springs in the city limits. The water in these springs contains some 26 minerals that turn the surrounding sand black like gunpowder – hence the earlier name of Gunpowder Springs.

Civil War history includes a skirmish at Lattermore's Mills on June 20, 1864, that was a part of the Battle of Kennesaw Mountain and General Sherman's Atlanta Campaign. Many slaves escaped the plantations in this area to join Sherman's forces and gain freedom. 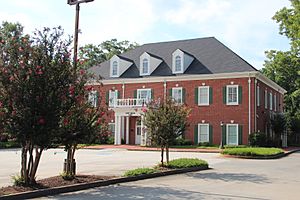 Powder Springs Public Schools are part of the Cobb County School District, and is home to McEachern High School, located on the site of the former Native American burial ground and the former Seventh District Agricultural and Mechanical (A&M) School.

All content from Kiddle encyclopedia articles (including the article images and facts) can be freely used under Attribution-ShareAlike license, unless stated otherwise. Cite this article:
Powder Springs, Georgia Facts for Kids. Kiddle Encyclopedia.