Aydıncık is a district of Mersin Province on the Mediterranean coast of Turkey. It is 173 kilometres (107 mi) from Mersin and 325 kilometres (202 mi) from Antalya.

Aydıncık has also been called Celenderis, The coast was settled by Turkish peoples. The town's name changed to Gilindere. It continued to be an important port between Anatolia and Cyprus until the beginning of the 20th century. It was renamed Aydıncık in 1965.

The remains of ancient Celenderis are very few. The ruins today are mostly covered over by the expanding modern Aydıncık. Fortifications may still be seen around the modern lighthouse near the harbor. There is a landlocked bay with its famous spring 1.6 kilometres (0.99 mi) to the west at Soguksu. Here there are ancient ruins There is a bath at the head of the bay. There are also traces of archaeological debris on the peninsula at its mouth. 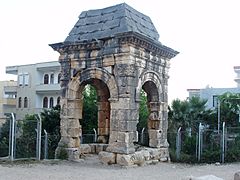 There is a large Roman Cenotaph with four columns from the 2nd century.

The cave of Gilindere is about an hour's ride along the coast by small boat. It is about 555 metres (1,821 ft) and 46 metres (151 ft) deep. It has attractive stone and crystal formations.

All content from Kiddle encyclopedia articles (including the article images and facts) can be freely used under Attribution-ShareAlike license, unless stated otherwise. Cite this article:
Aydıncık, Mersin Facts for Kids. Kiddle Encyclopedia.