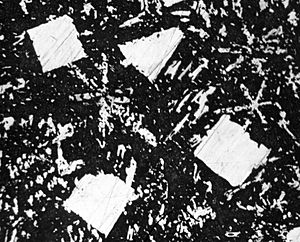 Babbitt, also called Babbitt metal or bearing metal, is any of several alloys used for the bearing surface in a plain bearing.

The original Babbitt metal was invented in 1839 by Isaac Babbitt in Taunton, Massachusetts, USA. Other formulations were later developed (and Isaac Babbitt's exact formulation is not known with certainty). To deemphasize the term's eponymous character, modern writers often lowercase it (babbitt metal—as with "diesel engine"). It is preferred over the term "white metal", which also refers to bearing metal, because "white metal" is an ambiguous term with various meanings.

Babbitt metal is most commonly used as a thin surface layer in a complex, multi-metal structure, but its original use was as a cast-in-place bulk bearing material. Babbitt metal is characterized by its resistance to galling. Babbitt metal is soft and easily damaged, which suggests that it might be unsuitable for a bearing surface. However, its structure is made up of small hard crystals dispersed in a softer metal, which makes it a metal matrix composite. As the bearing wears, the softer metal erodes somewhat, which creates paths for lubricant between the hard high spots that provide the actual bearing surface. When tin is used as the softer metal, friction causes the tin to melt and function as a lubricant, which protects the bearing from wear when other lubricants are absent.

There are many Babbitt alloys in addition to Babbitt's original. Some common compositions are:

Internal combustion motors use Babbitt metal which is primarily tin-based because it can withstand the pounding. Lead-based Babbitt tends to work-harden and develop cracks but it is suitable for constant-turning tools such as sawblades.

In the traditional style of a babbitt metal bearing, a cast iron pillow block is assembled as a loose fit around the shaft, with the shaft in approximately its final position. The inner face of the cast iron pillow block is often drilled to form a key to locate the bearing metal as it is cast into place. The ends of the bearing are packed with clay and molten metal poured into the cavity around the shaft, initially half filling the pillow block. The bearing is stripped, and the metal trimmed back to the top surface of the pillow block. Hardened babbitt metal is soft enough to be cut with a knife or sharp chisel.

The two halves of the bearing are then split at the shim, the oil holes cleared of metal and oil ways are cut into the surface of the new bearing. The shaft is smeared with engineer's blue and rotated in the bearing. When the bearing is disassembled the blue fills the hollows and is rubbed off the high spots. The high spots are scraped down, and the process repeated, until a uniform and evenly distributed pattern of blue shows when the shaft is removed. The bearing is then cleaned and lubricated, and shimmed up such that the shaft is held firmly but not binding in the bearing. The bearing is then "run in" by being run heavily lubricated at low load and revolution, completing the process of exposing the hard bearing surface. After final adjustment of the shimming, a very reliable and high load capability bearing results.

Before the advent of low cost electric motors, power was distributed through factories from a central engine via overhead shafts running in hundreds of Babbitt bearings.

The expression a "run bearing" also derives from this style of bearing, since failure of lubrication will lead to heat build up due to friction in the bearing, eventually leading to the bearing metal liquefying and running out of the pillow block.

Until the mid 1950s, poured Babbitt bearings were common in automotive applications. The Babbitt was poured into the block or caps using a form. Tin-based Babbitts were used as they could stand up to the impact loads found on the connecting rods and crankshaft. The poured Babbitt bearings were kept thin. The rods and caps would have shims that could be peeled off as the Babbitt wore. Ford was known to use two .002" on each cap and Babbitt that was 86% tin, 7% copper, 7% antimony (see the KRW catalogs for the Model T). Steel shims were used as the brass shims used today tend to compress over time contributing to shorter bearing life. The poured Babbitt bearings commonly get over 50,000 miles of use before needing replacement. Poured Babbitt bearings are also known to fail gracefully allowing the car to be driven for extended periods of time. The failed bearing is not likely to damage the crankshaft.

In more modern practice, the crankshaft and connecting rod big end bearings in a modern automobile engine are made of a replaceable steel shell, keyed to the bearing caps. The inner surface of the steel shell is plated with a coating of bronze which is in turn coated with a thin layer of Babbitt metal as the bearing surface.

The process of laying down this layer of white metal is known as Babbitting.

In many applications, rolling-element bearings, such as ball or roller bearings, have replaced Babbitt bearings. Though such bearings can offer a lower coefficient of friction than plain bearings, their key advantage is that they can operate reliably without a continuous pressurized supply of lubricant. Ball and roller bearings can also be used in configurations that are required to carry both radial and axial thrusts. However, rolling-element bearings lack the beneficial damping and shock-load capability provided by fluid-film bearings, such as the Babbitt.

All content from Kiddle encyclopedia articles (including the article images and facts) can be freely used under Attribution-ShareAlike license, unless stated otherwise. Cite this article:
Babbitt metal Facts for Kids. Kiddle Encyclopedia.