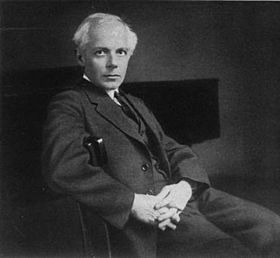 Béla Bartók (b. Nagyszentimiklós, Hungary, 25 March 1881; d. New York City 26 September 1945) was a famous Hungarian composer and pianist. He was one of the most important and original composers of the 20th century. He became very interested in folk music and travelled a lot in Hungary and other countries, including Romania, listening to the folk songs which the country people sang. He often used the style of these songs in his music. He is famous for his piano music, string quartets and several pieces for orchestra including one called Concerto for Orchestra. Bartók’s harmonies and lively rhythms were sometimes quite new to classical music and some audiences found them difficult to understand at first.

Bartók died by polycythemia in New York City from on 26 September 1945, aged 64. He left the Viola Concerto unfinished at his death; it was later finished by his pupil Tibor Serly.