Kids Encyclopedia Facts
Not to be confused with Beacon Fell, Cumbria. 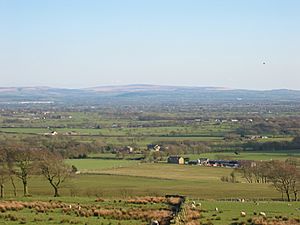 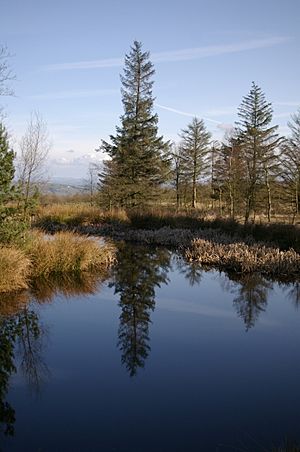 Beacon Fell is a fell in the civil parish of Goosnargh in Lancashire, England. The high ground, which rises to 266 m (873 ft), has been a country park since 1970. It is situated within the south westerly part of the Forest of Bowland, an Area of Outstanding Natural Beauty.

Beacon Fell is an isolated hill 2 miles (3 km) south of the main range of hills in the Forest of Bowland. Although, at 266 metres (873 ft) above sea level, small compared with the neighbouring fells, its position offers commanding views over the flat plain of the Fylde and Morecambe Bay to the west, as well as the Ribble valley to the south.

From Beacon Fell there are extensive views

On a clear day the Welsh hills, the Lake District hills and the Isle of Man may be visible.

The high visibility of the fell made it an ideal location for a beacon. A beacon on the fell has been recorded as early as 1002. The fell formed part of a chain of beacons to warn of the approach of the Spanish Armada in 1588, and of French forces between 1795 and 1815. More recently, beacon chains have been lit in celebration of coronations and jubilees.

In 1909, Fulwood Urban District Council bought the fell, which until then had been farmland, as a water supply. Under the provisions of the Fulwood and Whittingham Water Act of 1882, water from the fell was collected in the existing Barnsfold Reservoirs, 1 mile (2 km) to the south-west, and from there piped to Fulwood and Whittingham Asylum via Horns Dam Reservoir in Goosnargh parish and a small covered reservoir in Haighton. Conifer woodland was planted on the fell to help manage drainage. From 1959, the fell was no longer required for water, and was left to fall into disrepair. The reservoirs at Barnsfold are now used for angling.

Lancashire County Council acquired the site in 1969 and opened it, in October 1970, as one in the first tranche of country parks in the United Kingdom. A new road was built connecting the existing single-track roads on the fell to form a circular route around the fell, to be operated as a one-way system. Car parks were added, and on the site of a farmhouse a visitor centre was built.

The park is popular with visitors. It has a network of well-maintained footpaths through largely coniferous woodland. The Bowland Visitor Centre provides information about the fell and the Forest of Bowland, and serves refreshments. Wildlife that may be observed on the fell includes rabbit, hare, roe deer, stoat, weasel, red fox, badger, hedgehog, mole, grey squirrel and the otter. 11 species of dragonflies and damselflies have been found around the fell's tarn.

Charges were introduced in the car parks nearest to the visitor centre in 2011.

The fell features a number of sculptures by local artist Thompson Dagnall, Black Tiger and Kissing Seat (2006), Walking Snake (1998), Spruced up Heron (1996) and Orme Sight (1996) however the Owl (2013) which [replaced Hanging Bat (1998)] was not carved by Thompson Dagnall. Lancaster artist Richard Shilling is artist in residence who creates short-lasting sculptures from surrounding materials.

Beacon Fell Traditional Lancashire Cheese, named after the Fell, and currently manufactured in Longridge and Garstang, has Protected Designation of Origin status. Only cheeses made with milk from the Fylde or the Preston area, and conforming to the published method of production, may use this name.

All content from Kiddle encyclopedia articles (including the article images and facts) can be freely used under Attribution-ShareAlike license, unless stated otherwise. Cite this article:
Beacon Fell, Lancashire Facts for Kids. Kiddle Encyclopedia.