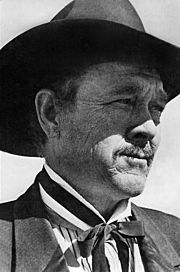 Ben Johnson in a publicity photo for The Wild Bunch

Ben Johnson, Jr. (June 13, 1918 – April 8, 1996), or Son Johnson, was an American actor. He was mostly known for being in Western movies such as Hang 'Em High. He was also a world champion rodeo cowboy, stuntman, and rancher. Johnson won an Academy Award for his role on The Last Picture Show.

All content from Kiddle encyclopedia articles (including the article images and facts) can be freely used under Attribution-ShareAlike license, unless stated otherwise. Cite this article:
Ben Johnson (actor) Facts for Kids. Kiddle Encyclopedia.