Kids Encyclopedia Facts
Not to be confused with Billinge Hill, Blackburn.

Billinge Hill, also known as Billinge Lump, is the highest point in the Metropolitan Borough of St Helens in North West England. It is also the highest point of Merseyside. It lies in Billinge, within the historic county boundaries of Lancashire. It is one of the 176 hills graded as a Marilyn in England.

A beacon tower is at the summit. Built as a summerhouse to Winstanley Hall in the 18th century, it was used for the Year 2000 celebrations. Most fireworks displays for miles around can be seen from the summit and people often gather there in small numbers to watch displays over the towns of Wigan and St Helens and the local village of Rainford. Over the years it has been covered in graffiti which was recently cleaned off and the metal panels restricting access to the inside of the beacon have been painted black. 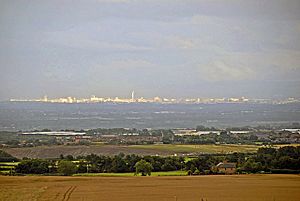 Nearby to the north-west are several large transmitter masts which take advantage of the height and relative isolation of the land. The views are fairly extensive, notably to the south-west where, when clear, the mountains of Snowdonia, in Wales, can be seen and to the north-east Winter Hill can be seen. Looking east one sees Manchester and the Derbyshire Peak District. On a clear day, it is possible to see Blackpool Tower over thirty miles away, the town of St. Helens and the Widnes - Runcorn bridge. Depending on the conditions and direction it is facing, the telescope at Jodrell Bank can be seen to the south-east too. 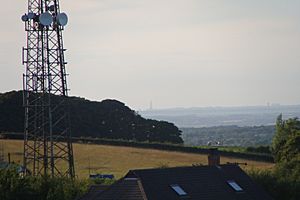 Blackpool Tower (visible on the horizon) from Billinge Hill.

Billinge Hill was also used by the Royal Observer Corps, and there was a bunker at the site, 60 yards (55 m) West of and below Beacon. The Beacon itself was used for aircraft observation during and after the war. The bunker would have been used to monitor the location of nuclear blasts and the resulting fallout over Lancashire in the event of nuclear war. The post opened in January 1960 and closed in October 1968.

All content from Kiddle encyclopedia articles (including the article images and facts) can be freely used under Attribution-ShareAlike license, unless stated otherwise. Cite this article:
Billinge Hill Facts for Kids. Kiddle Encyclopedia.