Bishop Monkton Ings is a Site of Special Scientific Interest, or SSSI, situated east of Bishop Monkton village in North Yorkshire, England. It consists mostly of marshy, calcareous grassland, with some broadleaved woodland, and some fen alongside the two watercourses which run through the site. This varied wetland forms a habitat for a variety of plants, including the semi-parasitic marsh lousewort (Pedicularis palustris). 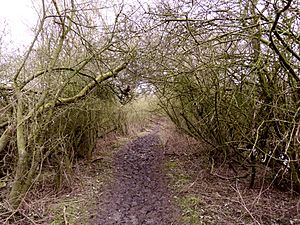 (An ings is a water meadow or marsh. The word is of Norse origin, entering the English language in the Danelaw period. It appears in a number of place names in Yorkshire, Cumbria and Lincolnshire).

Part of this site was sold in 1862 while tenanted by farmer George Heath (born ca. 1832), who was farming 132 acres with his brothers Edward and Robert. It was described as "a close of grass land called Ings Close, with a small willow garth therein, situated in the ings of Bishop Monkton, and containing 3 acres and 1 rood or thereabouts."

In 1883 the Ings was sold again, while in the tenancy of Mary Heath (born ca.1821), likely a relative of George Heath who was now farming in Hunslet, Leeds. This part of the site was at that time called the Ings Field, comprising two enclosures of "rich feeding grassland" with the Ings Drain running through it. It was measured as four acres, one rod and five poles. 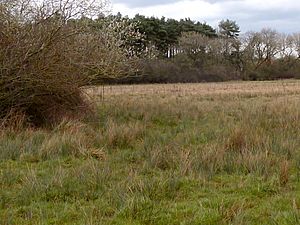 Part of the marsh area

Bishop Monkton Ings is a 37.788 hectares (0.378 km2; 0.146 sq mi) biological Site of Special Scientific Interest (SSSI). It lies to the south of Ripon, North Yorkshire. Access is via the muddy Ings Lane public footpath running east from Bishop Monkton village to the north-west corner of the site. The track is part of Ripon Rowel Walk. There is no vehicular access, and no facilities. The watercourses Holbeck and Ings Drain run through the site, which contains deciduous woodland, "species-rich marshy grassland subject to winter flooding" and some fen alongside the two streams.

The site was notified as an SSSI on 1 October 1986 for its "diverse range of wetland habitats" including woodland, and also because wetland such as this was once widespread, but is now under threat from land improvement and the drainage requirements of adjacent agricultural land and settlements.

Note: Unless otherwise stated, images of flora and fauna in this article are for illustrative purposes only, and were not taken at this site.

On raised ground in the south of the site there is grassland with neutral (as opposed to calcareous) soil. Here is found bugle, great burnet. sneezewort, devil's bit scabious, pignut and creeping buttercup. These flowers grow among grasses such as tufted hair grass, Yorkshire fog and sweet vernal grass.

There are three patches of deciduous woodland on the site. Under the trees in the dampest places are wild angelica and meadowsweet. On the slightly raised and drier ground can be found a number of plants including wood avens, red campion and dog's mercury. Guelder rose is frequent here. The trees include bay willow, crack willow, ash and alder.

An important habitat here is the fen alongside the watercourses. Here are reed canary grass, reed sweet grass and the reed Phragmites australis.

Common snipe and curlew are among the waders which breed in the fen.

Annual light grazing is required, by cattle, ponies or hill sheep, to maintain a rich and varied diversity of herbs and other biota on the grassland. The purpose of this is to prevent a build-up of tall grasses and dead vegetation, which in turn would inhibit diverse plant growth, and overshadow weaker plants. Grazing should occur between late spring and early autumn if there are no ground-nesting birds there. The size and function of existing drains should be maintained, and some scrub and hedge should be retained. Changes to drainage, and the use of fertiliser, herbicides and pesticides, are strongly discouraged because they would change the quality and diversity of the present plant and animal life.

All content from Kiddle encyclopedia articles (including the article images and facts) can be freely used under Attribution-ShareAlike license, unless stated otherwise. Cite this article:
Bishop Monkton Ings Facts for Kids. Kiddle Encyclopedia.