Blackburn Cathedral, officially known as the Cathedral Church of Blackburn Saint Mary the Virgin with St Paul, is an Anglican (Church of England) cathedral situated in the heart of Blackburn town centre, in Lancashire, England. The cathedral site has been home to a church for over a thousand years and the first stone church was built there in Norman times.

With the creation of the Diocese of Blackburn in 1926 (taken from the Diocese of Manchester) the impressive parish church of St Mary the Virgin was raised to cathedral status. The church, which was built in 1826 and designed by architect John Palmer, now forms the cathedral's nave. It replaced the parish church that was demolished in 1819–1820.

In the early 1930s, fundraising began to enlarge the cathedral so that the building complemented its newfound importance. By 1938, enough money had been raised and work began on enlarging the new cathedral. Although work was interrupted by the war, it was resumed afterwards and continued through the 1950s and into the early 1960s. After the death of architect W.A. Forsyth in 1950, architect Laurence King joined the project and designed the distinctive lantern tower. The lantern tower, which consists of 56 different panes of coloured glass, with a modernist slender aluminium spire, was completed in 1967.

The cathedral was finally completed in 1977 and what had been built over the past decades was finally consecrated as Blackburn Cathedral that year.

The North transept contains eight misericords dating from the 15th century. It is not known at what time they arrived at the Cathedral, but they are believed to have originated at Whalley Abbey. This could mean that they were removed to a builder's yard after the Dissolution, but with the cathedral not being built until the 19th century, this allows for the possibility that they had lain unused for some 300 years.

On 17 April 2014 the Cathedral hosted the Royal Maundy service. In keeping with tradition, Elizabeth II handed out Maundy money to 88 men and 88 women. It was the Queen's first visit to the Cathedral. 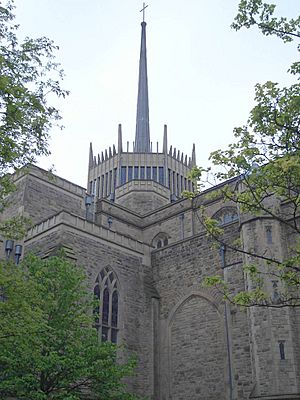 The exterior, with the rebuilt lantern tower and distinctive aluminium spire

The cathedral has seven choirs — Cathedral Choir of Boys and Men, Girls, Children's, Lantern Voices, YPC (Young Peoples' Choir), Renaissance Singers (Formally the Bach Choir) and Cathedral Consort (alternate Thursday Evensongs). On Sundays the Parish Communion is sung by the YPC and the Eucharist and Evensong by the Cathedral Choir.

A scheme for an organ in the west gallery was submitted, by John Gray and partner Frederick Davison, two years before the consecration of the new church. The organ was opened on 28 February 1828 with a concert which included works by Handel - extracts from his Messiah and Israel in Egypt and his Occasional Overture played by the new organist Joseph John Harris. Blackburn Cathedral is blessed with a world-class Organ, built by JW Walker and rebuilt by Wood of Huddersfield. This is not only showcased to great effect through its use as an inspirational liturgical instrument, but also through the many recordings that have been made and in the regular lunchtime concerts and organ meditations that have taken place throughout the year.

The first mention of bells, in the old parish church, was in 1552 when the Vicar and churchwardens purchased five bells from the Royal Commissioners for £26-12-1. A new peal of six bells was cast in 1737 from the metal of the existing bells and it was this ring of six that was moved over to the west tower of the new church in 1832. Four bells were added during 1851-52 to form a ring of ten.

All content from Kiddle encyclopedia articles (including the article images and facts) can be freely used under Attribution-ShareAlike license, unless stated otherwise. Cite this article:
Blackburn Cathedral Facts for Kids. Kiddle Encyclopedia.