Blackburn with Darwen facts for kids

Blackburn with Darwen is a unitary authority area in Lancashire, North West England. It consists of Blackburn, the small town of Darwen to the south of it, and the surrounding countryside. The population of the Unitary Authority taken at the 2011 census was 147,489.

The proportion of Muslim population (19.4% or 26,674 people) is the third highest among all local authorities in the United Kingdom and the highest outside London. 20.4% of the districts population belongs to any South Asian ethnic group, making it the highest percentage in the region, and almost four times higher than national average of South Asians.

According to the 2011 census, the proportion of Muslims increased to 27%.

The authority borders with boroughs administered as within the Greater Manchester and Lancashire upper-tier local authorities: Chorley in the west and then (clockwise) South Ribble, Ribble Valley, Hyndburn and Rossendale in Lancashire; Bury and Bolton in Greater Manchester. The data below is based on June 2012. 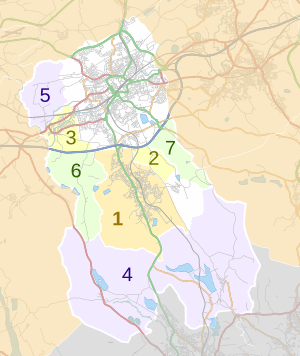 All content from Kiddle encyclopedia articles (including the article images and facts) can be freely used under Attribution-ShareAlike license, unless stated otherwise. Cite this article:
Blackburn with Darwen Facts for Kids. Kiddle Encyclopedia.