Blanchetown is a small township in South Australia, on the (west) bank of the Murray River, 130 kilometres (81 mi) northeast of Adelaide. The Blanchetown Bridge is the westernmost (and farthest downstream) of the four crossings of the Sturt Highway over the Murray River. During the nineteenth century it was an important transportation centre on the lower Murray. In the early 21st century, Blanchetown has been described as "a strange mixture of historic buildings and temporary shacks built by holidaymakers on the banks of the river". Blanchetown is widely regarded as the entrance to the Riverland district.

Blanchetown was originally surveyed in October 1855 as Blanche Town. It was named after Lady Blanche MacDonnell, the wife of the Governor of South Australia, Sir Richard MacDonnell. The Governor selected the site personally, to replace an earlier settlement of Murrundi (or Moorundee) - five kilometres downstream - which was subject to flooding. Murrundi had been chosen as the base of the Protector of Aborigines by Edward John Eyre since 1841.

There had been a ferry crossing at Blanchetown since 1869 (private before 1879, then Government-run).  In February 1876 Blanchetown was described as a "small but ambitious settlement, containing a dozen houses, and having a population of about 50 people".  The buildings in the township were "substantially built of a stone quarried in the neighbourhood".  The post and telegraph office, the hotel and store were described as "the main buildings".

When land was first sold at Blanche Town it was on the "understanding that a railway should be made there, and some of the allotments consequently fetched as much as £1,200 per acre".  By 1876, however, it was apparent that the railway would by-pass Blanchetown.  It was reported that "the inhabitants regard the non-fulfillment of this promise as savouring of repudiation".  The railway line connecting Adelaide with the town of Morgan, upstream of Blanchetown, was opened in 1878.  This development adversely affected the progress of Blanchetown and resulted in a decline of steamer traffic to the town.

Blanchetown has a number of heritage-listed sites, including: 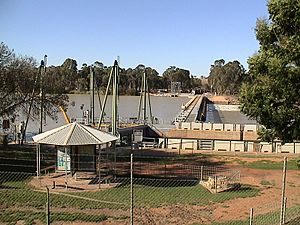 Lock 1 and weir at Blanchetown

Blanchetown is north of Goyder's Line, and so the land around it is unsuitable for farming unless it is irrigated using water drawn from the Murray. Upstream of Blanchetown, land above the cliffs on the west bank is mostly used for sheep grazing, while land on the east bank is irrigated for citrus orchards.

The locality of Blanchetown includes the Brookfield Conservation Park west of the town and north of the Sturt Highway. It is an example of the mallee near Goyder's Line. The Advent Lutheran Church Blanchetown is actually in Paisley, a few hundred metres north of the eastern end of the bridge.

Lock 1 on the Murray River is at Blanchetown. It was the first of the 13 locks and weirs built on the Murray, and was completed in 1922. The lock chamber is approximately 56 feet by 275 feet (17 by 83 metres). The original purpose was to facilitate navigation for trade along the Murray, but by the time the weirs had been built, trade was declining. The primary purposes now are for recreational boating and to maintain water levels for irrigation. The pool upstream of the weir is 3.6 metres above sea level. It is 274 km from the Murray Mouth.

A bridge was constructed at Blanchetown in 1963. It was the first major prestressed concrete highway bridge in South Australia. In the 1990s it was found to not be structurally sound enough to safely carry B-double trucks. Until a new bridge could be built, these were diverted from near Monash via Morgan and Eudunda to rejoin the highway at Gawler, thus travelling further but avoiding the Kingston and Blanchetown bridges. The replacement bridge was completed in November 1998.

All content from Kiddle encyclopedia articles (including the article images and facts) can be freely used under Attribution-ShareAlike license, unless stated otherwise. Cite this article:
Blanchetown Facts for Kids. Kiddle Encyclopedia.