The Silurian Bloomsburg Formation is a mapped bedrock unit in Pennsylvania, New Jersey, New York and Maryland. It is named for the town of Bloomsburg, Pennsylvania in which it was first described. The Bloomsburg marked the first occurrence of red sedimentary rocks in the Appalachian Basin.

The Bloomsburg is defined as a grayish-red and greenish-gray claystone, argillaceous siltstone, shale, and very fine to fine-grained sandstone, arranged in fining-upward cycles. Although the Bloomsburg can sometimes be green to gray, its most dominant color is red and they are often called "The Bloomsburg Red Beds". This is significant in the Appalachian Basin since it marks the first large scale terrestrial collection of sediments in the rock record. Most of the sediments that were deposited before this time were marine, or a small scale terrestrial zone.

The depositional environment of the Bloomsburg was mostly terrestrial or shallow marine deposits resulting in a molasse sequence produced by the Taconic orogeny. The red color is often evidence that the sediments were deposited in arid or oxidizing conditions. The upper parts of the Bloomsburg are thought to be a marine transition zone.

There are numerous fossils found in the Bloomsburg, mostly in the upper parts of the formation. There are trace fossils of early land plants and brachiopod fossils in the upper marine transitional zones. 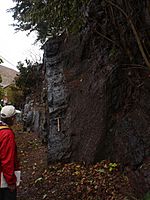 Outcrop of the Bloomsburg Formation at Port Clinton

Relative age dating of the Bloomsburg places it in the Upper Silurian period, being deposited between 417 and 410 (±5) million years ago.

The Bloomsburg formation is a source of material for the manufacture of brick and other clay products, as well as a local building stone.

All content from Kiddle encyclopedia articles (including the article images and facts) can be freely used under Attribution-ShareAlike license, unless stated otherwise. Cite this article:
Bloomsburg Formation Facts for Kids. Kiddle Encyclopedia.