Boconnoc (Cornish: Boskennek) is a civil parish in Cornwall, England, United Kingdom, approximately four miles east of the town of Lostwithiel. According to the 2011 census the parish had a population of 96.

The parish is rural in character and is fairly well wooded. It is bordered to the west by St Winnow parish, to the south by St Veep parish, to the southeast and east by Lanreath parish, and to the north by Broadoak parish. The hamlets of Couch's Mill and Brooks are in the parish. Part of ancient deer park at Boconnoc House contains an internationally important assemblage of lichens and is one of the most important sites in Europe for lichens.

There are Cornish crosses in the churchyard, on Druids' Hill and in Boconnoc Park. The latter cross was removed here from Lanlivery and has some curious incised ornament.

Boconnoc is mentioned in the Domesday Book (1086) as Bochenod. The first known owners were the De Cant family in 1268.

The present Boconnoc House was built on the site of a medieval house owned successively by the families of Carminow and Mohun. Lord Mohun's widow sold the estate to Governor Thomas "Diamond" Pitt, a wealthy trader who had made a fortune in India. Pitt founded a political dynasty that included numerous MPs, including his grandson William Pitt and great-grandson William Pitt the Younger. After Governor Pitt's death in 1726 the estate passed to his son Robert Pitt and then the following year to his son Thomas Pitt. In the Return of Owners of Land survey of 1873 Mr Cyril Fortescue of Boconnoc was listed in the top ten landowners in Cornwall with an estate of 20,148 acres (81.54 km2), or 2.65% of Cornwall.

The country estate is steeped in history and includes the largest landscaped park in Cornwall. It is home to Boconnoc Cricket Club who plays in the Deer Park. In 1993, the estate was used as a location for the film The Three Musketeers. 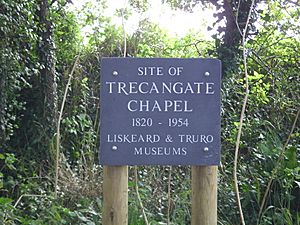 A chapel stood in the hamlet of Trecangate between 1820 and 1954. It was built using cob walls; a sign marking its position was erected in 2009.

Anthony Fortescue, owner of Boconnoc and High Sheriff of Cornwall, was found dead on 9 November 2015 following a firearms incident. The inquest returned an open verdict. 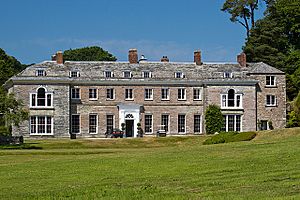 Boconnoc House (Grade II* listed) was built in the 18th century by two members of the Pitt family: one wing was built c. 1721 by Thomas Pitt, Governor of Madras, and the other in 1772 by Thomas Pitt, 1st Baron Camelford. The two wings formed an L-shape and the grounds are finely landscaped: on a hill behind the house is an obelisk in memory of Sir Richard Lyttelton (1771). During the 19th century the estate passed into the ownership of the Fortescues who made some alterations to the structure in 1883: there are some more recent additions and the south wing was demolished in 1971.

The parish church is behind the house and fairly small: its dedication is unknown. It contains an interesting 15th-century font and a monument to Penelope Mohun, 1637. The modern tower has five sides in the lower part and eight in the upper. Features of interest include a musicians' gallery, the altar table made by Sir Reginald (Raynold) Mohun, 1621, the Jacobean pulpit, and a monument to the wife of Will Drew.

Old-growth, sessile oak (Quercus petraea), growing in ravines and slopes in parts of the ancient deer park at Boconnoc House, contain an internationally important assemblage of lichens, making it one of the most important sites in Europe. The site is also considered to be the best ″old-growth, southern-oceanic oak woodland″ in the south-west.

All content from Kiddle encyclopedia articles (including the article images and facts) can be freely used under Attribution-ShareAlike license, unless stated otherwise. Cite this article:
Boconnoc Facts for Kids. Kiddle Encyclopedia.