The Bushtit (Psaltriparus minimus) is a long-tailed tit found in North America. It is the only species in the family found in the New World, and the only member of the genus Psaltriparus.

The Bushtit lives in mixed open woodlands. It also lives in parks and gardens. It lives in the western United States and highland parts of Mexico all year, ranging from Vancouver through the Great Basin and the lowlands and foothills of California to southern Mexico and Guatemala.

The Bushtit is one of the smallest passerines in North America, at 11 cm in length and 5.3 g in weight. It is gray-brown overall, with a large head, a short neck, a long tail, and a short stubby bill. The male has dark eyes and the adult female, yellow.

The Bushtit is active and gregarious, searching for small insects and spiders in mixed-species feeding flocks with species such as chickadees and warblers, of 10 to over 40 birds. Members of the group keep making calls to each other that can be described as a short tsit.

All the Aegithalidae are forest birds, particularly forest edge and understory habitats. The species in the genus Aegithalos prefer deciduous or mixed deciduous forests, while the tiny pygmy tit is found mostly in montane coniferous forest. The bushtit is found in a wide range of habitats, including on occasion sagebrush and other arid shrublands, but is most common in mixed woodland. Most species in this family live in mountainous habitats in and around the Himalayas, and all are distributed in Eurasia except the American bushtit, which is native to western North America. The long-tailed tit has the most widespread distribution of any species of Aegithalidae, occurring across Eurasia from Britain to Japan. Two species in contrast have tiny distributions, the Burmese bushtit, which is entirely restricted to two mountains in Burma, and the pygmy bushtit, which is restricted to the mountains of western Java. The species in this family are generally not migratory, although the long-tailed tit is prone to dispersing in the northern edges of its range (particularly in Siberia). Many mountainous species move to lower ground during the winter. 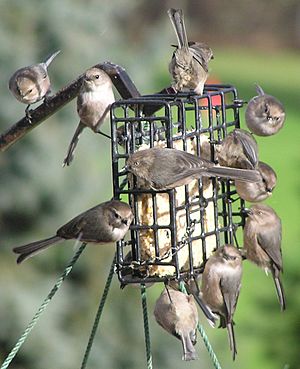 They are small birds, measuring 9 to 14 cm (3.5–5.5 in) in length, including the relatively long tail, and weighing just 4.5 to 9 g (0.16–0.32 oz). Their plumage is typically dull grey or brown, although some species have white markings and the long-tailed tit has some pinkish colour. In contrast to the rest of the family the two Leptopoecile tit-warblers are quite brightly coloured, having violet and blue plumage. The crested tit-warbler is the only member of the family to have a crest. The bills in this family are tiny, short and conical in shape. The wings are short and rounded and the legs are relatively long.

Birds in this family live in flocks ranging from 4 to 50 individuals. Flocks form as soon as one breeding season finishes and last until the next one begins. They maintain contact with "churring" calls; their songs are quiet. Other species of birds, such as tits or warblers, will occasionally join the flock to forage.

They are omnivorous, primarily eating insects and other invertebrates such as leafhoppers, treehoppers, aphids, scale insects, and caterpillars. Plant material, such as berries or seeds, is taken occasionally during the winter. The family generally forages arboreally, usually in the shrub layer or canopy, and seldom visits the ground. Prey is generally gleaned from branches, leaves and buds. Less frequently, prey is taken in the air. While foraging, this agile family may hang upside down on branches (although this behaviour is not thought to occur in the tit-warblers) and even manipulate branches and leaves in order to locate hidden food.

The family generally has a monogamous breeding system. Pairs may be aided by helpers, where a related individual (or more than one) helps the established pair raise the young. This has been recorded in at least four of the species; further research is required to see if the behavior carries over to other members of the family. Aegithalids make domed, bag-like, nests of woven cobwebs and lichen, which they line with feathers. They make the nests in trees with thick foliage, making them difficult for predators to find. The clutch comprises 6 to 10 white eggs, which in many of the species have red speckles. Adults incubate the eggs for 13 to 14 days; young stay in the nest for 16 to 17 days. In at least four of the species (the long-tailed tit, the American bushtit, the black-throated bushtit, and silver-throated bushtit), only the female incubates. Young chicks are fed exclusively on insects and spiders.

All content from Kiddle encyclopedia articles (including the article images and facts) can be freely used under Attribution-ShareAlike license, unless stated otherwise. Cite this article:
Bushtit Facts for Kids. Kiddle Encyclopedia.