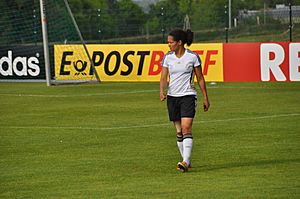 Célia Šašić (née: Okoyino da Mbabi; born on 27 June 1988 in Bonn, Germany) is a German association football forward who currently plays for 1. FFC Frankfurt and the Germany women's national football team. She is one of the best German footballers of her generation. She was the Bundesliga top scorer in 2013–14 and 2014–15, and was also named the German Player of the Year in 2012. She is of Cameroonian decent.

She also won the Golden Boot as the leading goal scorer in the 2015 FIFA Women's World Cup. Because she was tied with American Carli Lloyd with 6 goals, the award was decided by tiebreakers. Both were even on the first tiebreaker of assists, with one each. Šašić won the award on the second tiebreaker, having played fewer minutes than Lloyd.

All content from Kiddle encyclopedia articles (including the article images and facts) can be freely used under Attribution-ShareAlike license, unless stated otherwise. Cite this article:
Célia Šašić Facts for Kids. Kiddle Encyclopedia.