Cadet Peak is a 7,186 ft (2,190 m) mountain summit near the western edge of the North Cascades, in Snohomish County of Washington state. The peak is located southeast of Barlow Pass along the Mountain Loop Highway, and two miles east of the historic Monte Cristo area. It is situated within the Henry M. Jackson Wilderness, on land administered by the Mount Baker-Snoqualmie National Forest. The mountain was originally called Foggy Peak, for the Foggy Mine claim on the mountain's north slope, but the name was changed in 1896 to its present name, and the Foggy Peak name was transferred to the peak immediately northwest of Cadet. Back in the old mining days, the long sub-range stretching from Cadet Peak to Sheep Mountain was known as Pride of the Mountains Range. Cadet's nearest higher neighbor is Kyes Peak, 1.59 mi (2.56 km) to the south-southeast. Precipitation runoff from the mountain drains into tributaries of the Sauk River.

Cadet Peak is located in the marine west coast climate zone of western North America. Most weather fronts originate in the Pacific Ocean, and travel northeast toward the Cascade Mountains. As fronts approach the North Cascades, they are forced upward by the peaks of the Cascade Range, causing them to drop their moisture in the form of rain or snowfall onto the Cascades (Orographic lift). As a result, the west side of the North Cascades experiences high precipitation, especially during the winter months in the form of snowfall. Because of maritime influence, snow tends to be wet and heavy, resulting in high avalanche danger. During winter months, weather is usually cloudy, but, due to high pressure systems over the Pacific Ocean that intensify during summer months, there is often little or no cloud cover during the summer. Due to its temperate climate and proximity to the Pacific Ocean, areas west of the Cascade Crest very rarely experience temperatures below 0 °F (−18 °C) or above 80 °F (27 °C). The months July through September offer the most favorable weather for viewing or climbing this peak. 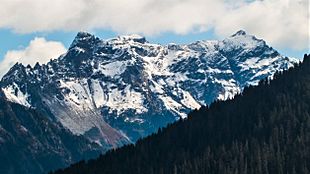 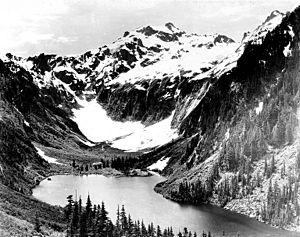 All content from Kiddle encyclopedia articles (including the article images and facts) can be freely used under Attribution-ShareAlike license, unless stated otherwise. Cite this article:
Cadet Peak Facts for Kids. Kiddle Encyclopedia.